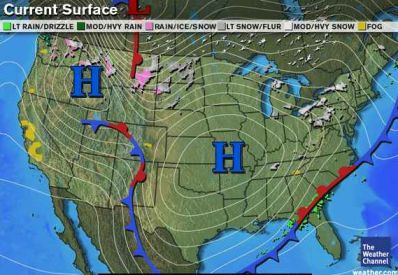 A classic winter weather situation is brewing for this weekend. This time of year the Arctic air masses that come out of Canada are cold and dry, thus relatively dense. The dense air hugs the ground, making the high pressure system shallow, which disconnects it from the steering winds of the jet stream. When that happens the Arctic air struggles to get over the Appalachians. Instead it sinks southward across the Great Plains and into the Gulf of Mexico. On occasion the cold air will cross the Gulf, pass through the Isthmus of Tehuantepec (you do remember it's strategic importance to the Gadsden Purchase, right?) and reach the Pacific. As the cold air funnels through the gap in the Sierra Madre it creates a violent breeze snickeringly known to juvenile meteorologists as a tehuantepecer.

Anyway, that Arctic air mass is going to bring cool and clear conditions to the city today and increasing clouds tomorrow. Highs both days are not likely to reach 40. Tomorrow night an Alberta Clipper will be skirting across the northern edge of the Arctic air mass. The Clipper will probably have enough moisture with it to drop a bit of snow. Accumulations are more likely to happen north of the city but don't be surprised by a dusting of snow by Sunday morning.

As the Clipper zooms away on Sunday the winds will pick up and it is going to feel downright nasty outside. Don't be fooled by a fairly benign Sunday morning. By afternoon the winds will be blowing at a steady 20-25 miles an hour, with gusts into the 30s. The high on Sunday will be just above freezing but the wind chill is likely to dip into the single digits. Brrr.

The City Council’s committee on criminal justice held a six-hour hearing on the issue — but no vote.

By
Stephen Nessen
NYPD, ATF arrest two men accused of robbing Brooklyn pastor during service
By
Samantha Max
Extra Extra: Real New Yorkers know how to get rid of that dead body smell in the apartment
By
James Ramsay
A mystery car is up for grabs in NYC. Let's try to find it.
By
Jake Offenhartz
Get the news New Yorkers need in your inbox