Hours after her boss put out a campaign video stating he won't drop out of the mayoral race, Barbara Morgan, spokeswoman for Anthony Weiner's campaign, has created a new controversy. In an apparently on-the-record and off-the-rails conversation with a Talking Points Memo reporter, Morgan went off on a former intern who accused Weiner of being uninspiring. Morgan said of the intern, "I’m dealing with like stupid fucking interns who make it on to the cover of the Daily News even though they signed NDAs and/or they proceeded to trash me. And by the way, I tried to fire her, but she begged to come back and I gave her a second chance.” 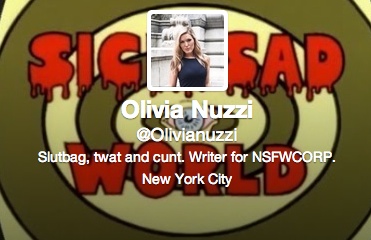 Morgan was referring to Olivia Nuzzi, who wrote a piece for the News claiming that most interns for Weiner's effort were there to hopefully network with his wife Huma Abedin and that Weiner couldn't remember interns' names, even though he bragged that he could. Nuzzi noted, "I left after a month to begin taking summer classes. I know one staff member who quit because, he told me, he was paid less than a third of what he had been promised."

In a conversation with TPM's Hunter Walker, Morgan spoke freely:

“Fucking slutbag. Nice fucking glamour shot on the cover of the Daily News. Man, see if you ever get a job in this town again,” said Morgan.

According to Morgan, Nuzzi stopped interning for the campaign “like four weeks ago.” Nuzzi’s story on NSFWCORP described her as having spent “four weeks” as a Weiner intern. When asked whether the claims in Nuzzi’s stories were true, Morgan suggested many of them were “bullshit.”
“It’s all bullshit,” she said. “I mean, it’s such bullshit. She could fucking — fucking twat.”

Based on her colorful description of Nuzzi’s cover story, TPM asked Morgan whether she thought Nuzzi joined the campaign with the express purpose of penning a tell-all story.

“I have no idea, but I can tell you she … like accosted me at like our petitioning thing to be able to become my intern, begged me to be my intern, sent me something within like 20 minutes of meeting her and then proceeded to — she came in the next day and was like, basically, ‘I want to be your bitch all summer long, that’s all I want to do is be your righthand person,’” Morgan said of Nuzzi. “I was like, ‘OK, well, it’s not really glamorous, like, you’re going to do clips, and you’re going to do media catching, and you’re going to do x, y, and z and maybe I’ll get you to the point where you’re like doing some other stuff.”

Morgan also characterized Nuzzi as an unimpressive intern who "sucked... wasn’t good at setting up events. She was clearly there because she wanted to be seen" and put in little time over the four weeks she was there. Morgan also was annoyed that Nuzzi mocked her experience, "You know what? Fuck you, you little cunt. I’m not joking, I am going to sue her." For a minute, we forgot about Sydney Leathers and Carlos Danger!

Morgan contended in an email sent to the press tonight that her rant was private, "In a moment of frustration, I used inappropriate language in what I thought was an off the record conversation. It was wrong and I am very sorry, which is what I said tonight when I called and emailed Olivia to apologize." However, Josh Marshall, editor of Talking Points Memos, Tweeted, "No question the interview was on the record." Marshall also told Business Insider that Walker had actually been asking about Weiner's fundraising, "During that discussion, Morgan launched into a very animated series of comments about Nuzzi, which we quote in the piece."