UES Chosen Ones Choose Their Own Parking Placards 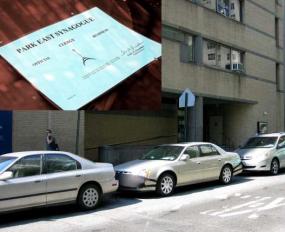 In a few days the city will begin its promised crackdown on the glut of parking placards issued to civil servants. But according to Uncivil Servants, a website that documents illegally parked cars displaying city permits, employees of Park East, an Upper East Side synagogue, have been using bogus DIY parking placards for years. And since they don’t even work for the city, their privileges won’t be affected by the new rules.

Uncivil Servants says that on an average day one can spot "8 to 10 of Park East employees' personal vehicles" parked in zones marked NO STANDING or NO PARKING 7AM - 7 PM. Park East makes their own placards for the drivers, which the local Community Board has approved, though they lack the authority for that according to City Councilman Dan Garodnick. Synagogue director Joel Baum explains to the Post that the privilege is enjoyed by teachers at the synagogue's school, in the same way some public school teachers use official parking placards. Feh!

After the arrangement came to light, Community Board 8 announced that the synagogue will gradually limit the number of illegitimate placards over the next two years, reducing the number to two by June 2010. It is unlikely the compromise will satisfy Uncivil Servants commenters like Dick Tracy: "These people are talking about illegal bogus placards made on a synagigue [sic] xerox machine as needed. This is beyond belief. A police precinct commander who doesn't know right from wrong empowered to enforce the law and a community board with no moral compass."