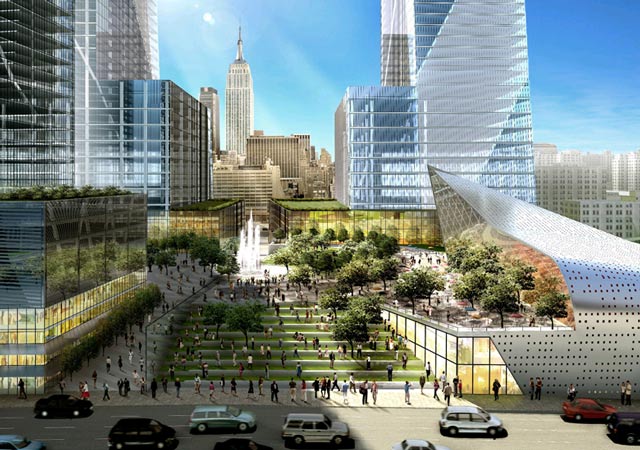 The MTA finally selected developer Tishman Speyer to transform the West Side rail yards, between 10th and 12th Avenues between 30th and 33rd Streets, into a 26-acre commercial and residential hub. MTA Chairman H. Dale Hemmerdinger said Tishman's $1.004 billion bid is "more money than anyone expected...It is an extraordinary deal."

The MTA believes the deal will help with a $700 million budget deficit. The runner-up bid, from Durst-Vornado, (there were a total of five development teams interested) was for $899.2 million.

Tishman's proposed plan includes 8 million square feet of office space, 13 acres of public space, over 3,000 residential units, and 550,000 square feet of retail space, plus a main plaza "Forum" area with, per Crain's, "grand stair case reminiscent of Rome’s Spanish Steps." But first, the MTA and Tishman must work out a 99-year lease. Tishman must also spend $2 billion to construct a platform over the rail yards.

See Hudson Yards renderings from Tishman Speyer. And here's a flashback: Back in 2005, the Jets were going to offer $100 million to put a West Side Stadium over the rail yards, but then the MTA decided it wanted $300 million...only to realize in 2006 that the yards could be worth $1.5 billion.