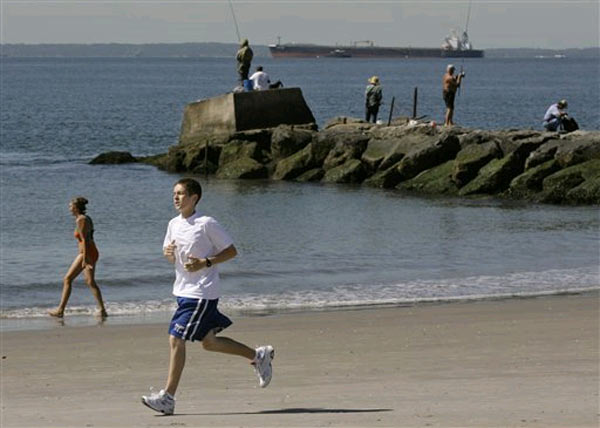 The fuel tanker, the White Sea, that ran aground near the Ambrose Channel off Coney Island and Sandy Hook, NJ, yesterday morning, is still stuck in the waters. An attempt to dislodge the 800-foot ship carrying over half a million barrels of "low-sulfur fuel oil" failed last night, so the Coast Guard began plans to "lighten" (remove) 110,000 barrels of fuel after the ship couldn't be moved. Coast Guard officials are hopeful that it can be dislodged during tonight's high tide around 8PM.

The Coast Guard says that the ship's steering system failed and the White Sea ran into what the Sun calls a "hard sandbar." There were no injuries reported and ship is not leaking, but its hull did sustain two breaches to ballast water tanks (divers will inspect damage this morning). A containment boom was launched by the ship, and there are additional booms available from the Coast Guard in case a spill does occur. Tugboats and the Coast Guard are guarding the ship, and the NYPD, FDNY, and Office of Emergency Management are monitoring the situation.

The ship is owned by Singapore-based Tanker Pacific; the ship was headed from Bayonne to Singapore. The Coast Guard says that no other ships were being delayed by the grounding.

Photograph of people enjoying a day at the beach, with the tanker in the background, by Kathy Willens/AP