Three WTC Towers May Be Scrapped From Ground Zero 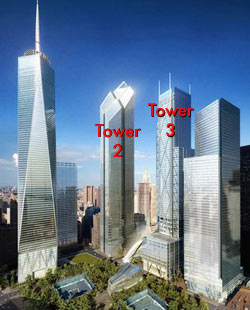 Last Friday, Assembly Speaker Sheldon Silver said, "Seven years and eight months after the attacks, I am fed up with the stalling and exasperated with the current state of the World Trade Center project," outlining that two of the towers must be completed by 2014 and urging developer Larry Silverstein to take on more of the risk, with help from the Port Authority. Now, the Daily News reports that the Port Authority is proposing a drastic change to the plan that would reduce the square footage from 10 million to 5 million:

The sources say the agency's new vision for the site calls for scrapping one tower that would have been taller than the Empire State Building and nixing two others that would have dwarfed the nearby Woolworth Building.

In place of two Silverstein behemoths, each designed by a British lord and soaring 79 stories [Tower 2 by Norman Foster and Tower 3 by Richard Rogers], the PA would erect a pair of short, squat buildings no taller than four or five floors - coined "stumps" - that could be used for retail shops, according to the proposal.

Additionally, the proposal would call for "Abandon[ing] all plans for Tower 5, slated to go on the toxic Deutsche Bank building site, for the foreseeable future" and "Underwrit[ing] about $1 billion in financing costs and rent abatements for Silverstein on 64-story, 975-foot Tower 4, which is the only building he'd get to construct"—plus having Silverstein "surrender most of his development fees, insurance proceeds and fine revenues in return" for Tower 4.

A summit about the World Trade Center development is being held at Gracie Mansion sometime this week. Mayor Bloomberg said, "Keep in mind it is a Port Authority thing, and the city doesn't have extra money, but we can hopefully be a facilitator." Silverstein has looked to the Port Authority for help before, too.