This Is What The Manhattan Skyline Will Look Like In 2020

If all goes as the current renderings say it will, the Manhattan skyline is going to resemble a giant pin cushion by the year 2020!

A series of new "supertall" buildings, the most soaring of which will be the 1,479-foot-tall Nordstrom Tower, are poised to dramatically alter the skyline over the next several years. Pictured in the above illustration, created by artist Armand Boudreaux, are 220 Central Park South, 111 West 57th Street, 432 Park Avenue, and 53 West 53rd Street. 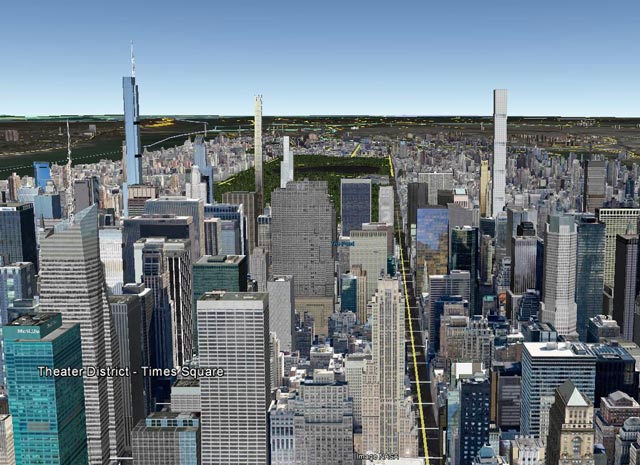 Is this a good thing? Depends on who you ask. New York YIMBY, who first published the illustrations, says yes: "Collectively, the towers will redefine the Midtown skyline in a positive way, showcasing New York’s continued dominance as the pre-eminent global city," writes the site's founder and editor Nikolai Fedak. He goes on:

With an existing plateau approximately 800 feet above street level, the new supertalls will add variety to the skyline, harkening back to 1920s Manhattan, which is most certainly a good thing. Midtown’s mesa-like appearance is adequate, but begs for dramatic peaks — which the 57th Street towers will deliver — and those are what ultimately define an iconic vista.

Central Park-goers and local NIMBYs, on the other hand, are concerned with the tower's shadows blotting out the sunlight, with fears that Little League games and family picnics will be prematurely aborted thanks to early onset darkness.

The only thing we know for sure is that Gothamist is going to have to redesign its logo.