Describing a new construction tower in Downtown Brooklyn, Stephen Smith, of the real estate investment firm Quantierra, says, "You have this sheer curtain wall, and then punctuating it like pockmarks, like acne scars, are these PTACs."

He practically spits the word "PTACs."

PTACs are large, unsightly air conditioner/heater combo units, hence the "packaged" part of the name. You probably didn't know they had a name, but you've seen plenty of them: they're typically long, low-slung boxes in appealingly nothing shades of beige and white, with a few dials on top, that fit snug against a wall. They're common throughout the country in hotels and motels, because they allow for the temperature of an individual room to be precisely controlled.

In New York City, PTACs are also the standard climate-regulation method for new construction buildings. This sets New York apart—nowhere else does a resident of a brand-new condo have to share her home with one, or several, of these hulking metal monstrosities.

"Chicago, Philadelphia, Boston, San Francisco, Los Angeles—none of the buildings there have these fucking glorified window units sticking through their walls," says Smith.

PTACs are installed by drilling a huge hole through the wall of a building. Because a PTAC can only heat or cool the room it's in, PTAC apartments will typically have multiple units. You can spot a PTAC building from a mile. The exterior of a PTAC is covered with a panel of metal grating, also called a grille. Multiplied across the entire facade of a building, these grilles can make even the sleekest glass tower look cheap.

I asked Andrew Dolkart, professor of historic preservation at Columbia's Graduate School of Architecture, Planning and Preservation and perhaps the expert on the architecture of New York City, if he feels the PTAC could be consider a pox on the city's buildings. "Yes, of course!" he said. "They become the dominant feature on a lot of these buildings."

The aesthetic of the PTAC grille is the non-aesthetic. Dolkart says he's encountered some buildings that thoughtfully integrate the grilles into their design, but that generally, they're just stuck on there. "You see them and they're pretty egregious," he says. "And there's a lot of that kind of construction going on, especially in Brooklyn." 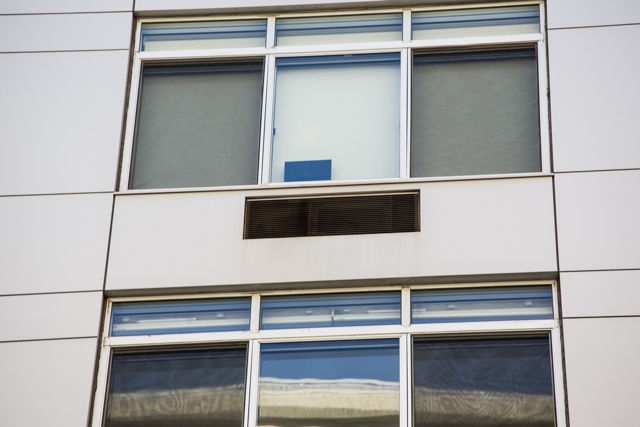 Once the grilles are up, they don't come down, even though they're not really designed to last. "In 10 years, they'll be bent out of shape, they'll be dirty," Dolkart says. "Architects don't like them—of course not—because they become eyesores on their building. Even when it's done well, it's eventually going to look bad."

Residents of PTAC apartments also complain about the aesthetic of the interior unit, which is are often three or four feet long and protrudes at least nine inches into a room. (In buildings that have thinner walls, a PTAC will jut out at least a foot.) Sites like Pinterest and Houzz offer dozens of products designed to camouflage or reclaim lost space from PTACs.

The unpleasant form of the PTAC is mirrored by its unimpressive function.

"They break down. They don't have a very long lifespan, these things. I've heard anywhere from five to 10 years, 10 being on the outside," says Dave Maundrell, the founder of AptsAndLofts.com and currently an executive vice president at CITI Habitats.

Scott Miller, of Miller Aire Corp, has been in business of installing and maintaining PTACs for more than 15 years. He says they can last much longer, but they need regular maintenance, which developers and owners often don't realize, or just don't care to do. "A lot of people, they buy a unit, they don't do anything to it, they let it sit for three years, two years, whatever," says Miller. "Then the filter's completely clogged solid, the evaporator coil is clogged solid with dirt, you can burn out your compressor."

Chloe Pinkerton, who lives with her husband in a three-year-old PTAC building in East Harlem, knows that well: "Probably a year into living in the apartment, in the summer, when we were mostly using it as an AC unit, it started to smell like something had died in it," she said.

Apparently, the unit's drainage bin was holding stagnant water, which in the summer induced mold growth, releasing the noxious odor in her apartment. Regular maintenance might have addressed the problem, but Pinkerton, like the vast majority of PTAC owners, had no idea that the thing needed to be serviced. The device has been a constant annoyance, though she prefers the PTAC to the window-mounted AC—two years ago, she was hospitalized after being struck by a falling window unit at Lexington Avenue near 100th Street. 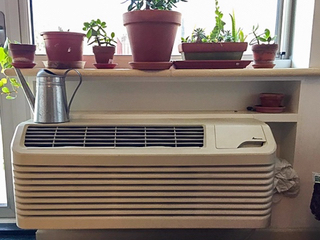 Because PTACs break down so easily—their lifespan is about the same as cheaper, removable window-mounted ACs—developers will often keep spare PTACs in a building for tenants whose units fall apart.

Cecil Scheib, the chief program officer of the Urban Green Council, a nonprofit that advocates for sustainable city living, has a bigger problem with PTACs. His organization conducted a study on room air conditioners (window-mounted, through-the-wall and PTAC) and found that energy losses from these units add up to approximately one percent of the city's annual carbon emissions. "It's absolutely huge," he says. Collectively, the study found, room ACs are responsible for around $150 million per year in excess energy bills.

PTACs are often shoddily installed, with tiny gaps all around that let the elements in, which means users have to crank up the AC or heat extra high to get a room to their desired temperature. The AC study found that the average unit is installed with gaps equivalent to a six-inch hole in the wall. (The gaps also annoyingly let in street noise.)

Even if properly installed, PTACs have a fundamental design flaw that limits their effectiveness: they are constructed out of metal. Metal is a very good conductor of heat, which means that in winter, they draw heat out of your apartment, and in summer, they draw it in. Given the extremes of New York's weather—there aren't too many weeks each year that we have neither the heat nor the AC on—that adds up to a lot of wasted energy.

So if PTACs are unsightly on the inside and out, poorly made, and inefficient, why do developers insist on using them?

It all comes down to money. Construction in New York is exorbitantly expensive. In fact, according to the design and engineering consultancy Arcadis, it's the most expensive city in the world in which to build. Development involves negotiating miles of red tape and New Yorkers are willing to tolerate just about anything to live here, so the PTAC endures. "Most times, the builders do it because it's cheap. It's the cheapest way to heat and cool a building, really," says Miller.

Putting in a PTAC doesn't require a permit, nor does it require a builder to install ductwork, which means the units are basically plug and play. It's difficult to generalize exactly how much cheaper a PTAC is per unit than a central air system—Miller said he didn't want to offer an estimate because costs vary widely depending on the number of units being purchased, their size, strength and so on. But one broker who spoke to Gothamist guessed that going with PTACs could be as much as 50 percent cheaper than installing central air.

Earlier this month, a provision of the housing code kicked in that will require developers to account for PTAC losses in the energy assessments they submit during the construction permitting process. (Somehow, this wasn't already mandated, leaving developers free to omit from their assessments energy losses from all the holes in the wall).

In the long term, perhaps the new policy will slowly induce developers to move away from the PTAC. 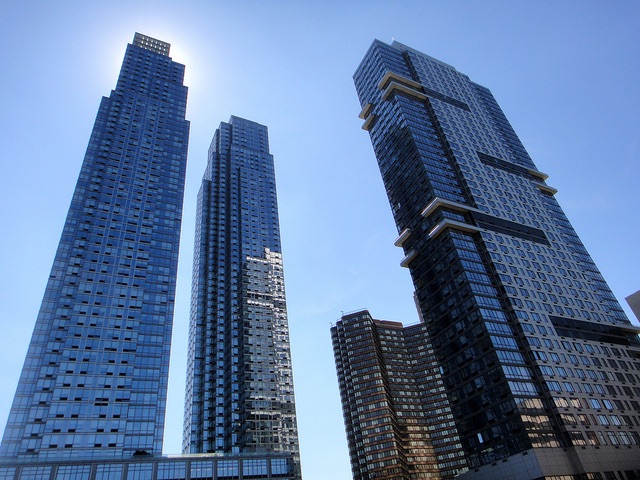 For now, PTACs remain a cheap and easy option for developers, and "cheap" and "easy" are magic words to anyone building in New York. So for the foreseeable future, New Yorkers in new buildings will have to make do with these beige beasts.

And architecture aficionados like Stephen Smith will continue to fume.

"When you're making a nice modernist building, the whole idea of it is clean lines," says Smith "You have a nice clean facade, and the PTAC just ruins it. It just ruins the whole look of the building."

Dan Nosowitz is a Brooklyn-based freelance writer. His work has appeared in Atlas Obscura, The Awl, Modern Farmer, the New York Times Magazine, and more.