Just under six months ago, work began on the 53rd Street R station to make it better...faster...stronger. Today, straphangers can reap the rewards of having to walk further for a transit option for around six months, as the new and improved 53rd Street stop is now open and features things like new benches, countdown clocks, artwork and of course, USB ports. You know, for millennials!

Wielding a Publishers Clearinghouse-esque comically oversized MetroCard, MTA Managing Director Ronnie Hakim ceremonially swiped in to the new station (before swiping in with a normal-sized MetroCard) to open it yesterday morning. Hakim then showed off a number of the station improvements, including an electronic display board showing service changes, clear glass at the station entrances to provide more light underground, new mosaic art from Brooklyn artist Mickalene Thomas and even plugged her phone into one of the USB ports.

"We got the job done quickly and efficiently. Our teams worked day and night to complete work on this extensively renovated station in just a little over five months,” Hakim said in a statement announcing the station reopening. “As a result, customers who use the station will now have a wide array of new tools to manage their commutes, including digital screens, countdown clocks located before the turnstiles and on the platforms, USB ports, and Wi-Fi connectivity." 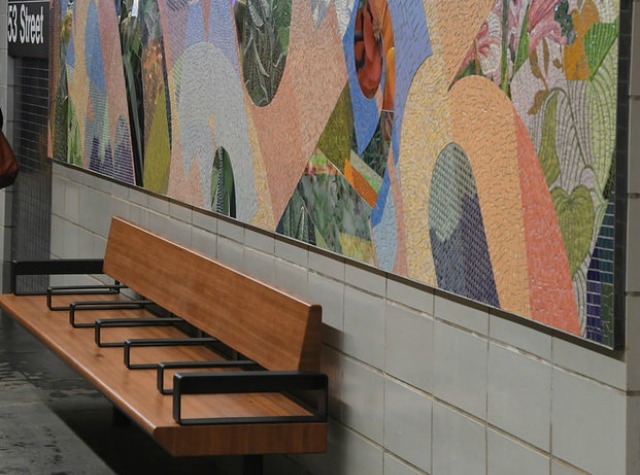 One of the new benches in the renovated station. (Patrick Cashin/MTA)

According to a press release from the MTA, the work on the station was completed ahead of schedule, thanks in part through the use of a design-build contract, which puts a single team in charge of both the design of the station and its construction. That same process is being used in the other subway stations where similar improvements are slated to take made.

The Bay Ridge Avenue and Prospect Avenue R stations are both currently undergoing the same work, and should both reopen by the end of the year.