The "Queens High Line" Is A Bad Idea

Since the success of the High Line, a park serendipitously located above one of the trendiest and wealthiest neighborhoods in the world, many a plan has been drawn up to try to replicate it. From the nearby Lowline on the Lower East Side, to Philadelphia’s Rail Park, to Chicago’s nascent 606, park advocates and urban planners everywhere are lining up to get in on the “line” craze, which aims to take unused rail lines in densely populated areas and turn them into parks. Yesterday, the Trust for Public Land released a report on “The QueensWay,” a sometimes-elevated park that would cut through central Queens along an unused rail corridor, which formerly brought commuters from Rego Park to The Rockaways, but was abandoned in 1962.

But is Central Queens a logical place for an expensive park project, or are we going to build a complicated park just because we can? The area does not necessarily fit the bill for such a “high line” project, only two of which (the other being the Promenade Plantée in Paris), have actually succeeded in being developed. There are a variety of reasons why the "High Line on steroids" in Central Queens would be a misuse of badly needed parks money, a fetishization of design over actual use, and could commit the city to missing an opportunity to finally bring real transit options to central Brooklyn and Queens.

Central Queens Doesn’t Need More Parks: For a borough with a reputation for being somewhat suburban, the majority of Queens has an incredibly dense population and lacks much public parkland. But in Central Queens, the QueensWay's potential home, is downright flush with parks.

In fact, the QueensWay would run right along Forest Park, a beautiful space that distinctly lacks a central component of any public park: the public. A bike ride in Forest Park is a wonderful experience, especially owing to its lack of pedestrians on paths. Much of Forest Park is taken up by a golf course, the destruction of which should be explored well before the construction of a brand new park. The elimination of the Forest Park golf course would open up some much needed meadow-space, which, as you can guess by the name, Forest Park lacks.

Building a new park before shuttering the golf course (of which Queens has several more) is like building a new home because the living room of the old one needs to be remodeled.

Forest Park lacks the visitors and tourists of Prospect and Central Parks, because it's located in deep Queens and there's a dearth of transit options, which reminds us...

The “QueensWay” Would Kill NYC’s Last Best Chance To Build Real Forward-Thinking Transit Options In Queens and Brooklyn: According to the report from the Trust for Public Land, the QueensWay would increase transit options in the area, allowing pedestrians to walk safely along the former transit line from the J/Z line in Woodhaven to the E/F/M/R lines in Rego Park. While this would certainly be a safer and more entertaining option than risking perilous Woodhaven Boulevard sidewalks (which have a habit of disappearing in sections), this wouldn't actually solve many transit needs. But a subway route built along many existing rail beds that might actually save New York City from another 100 years of congestion.

Connecting more of the subway lines in the outer-boroughs, and shifting commuters away from Manhattan as the best option to find a transfer, is an achievable goal for the MTA. A new subway line would radically alter the landscape of New York City public transit, at a time when NYC increasingly needs more options.

No matter how many high-rises are built in Manhattan, the majority of subway-users will still be commuting from the outer-boroughs, and an increasing amount of those commuters will be going from Brooklyn to Queens or vice-versa. The QueensWay would eliminate a vital section of the proposed project, and even though a new subway line presents a lot of logistical hurdles (see: $$$), it’s still far too early to give up on a project that might make the city more livable.

A rendering of a green space on the QueensWay.

QueensWay proponents point to plans for a Select Bus Service line on Woodhaven Boulevard as a revolution in transit for the area, but unfortunately, the plan has already been met with stern opposition from local residents (the city has a history of wilting in front of community opposition to SBS projects). Residents of the area seem almost uniformly unwilling to deal with many transit proposals, or large-scale projects for that matter, which leads us to...

The Community Around The Proposed “QueensWay” Is Not That Into It: While the report from the Trust for Public Land points out the terrific diversity of the communities surrounding the QueensWay (it's true!) these communities also cherish their privacy, and have voted down or strongly opposed any project that would either raise rents in the area or bring more people to it. The Woodhaven Resident’s Block Association released a strongly-worded opposition to any development of the rail line, saying that “In light of the diverse — and sometimes conflicting — opinions we’ve received from our community, we believe that leaving the abandoned rail line alone is the best way to satisfy the needs and desires of as many residents as possible.”

Acquiescing to NIMBYism is certainly not in the best interest of anyone looking to complete a necessary transit or large-scale municipal project, but it’s usually good to have the community on your side when building a park for them. Of course, a plan like a new subway line would be met with same rabid community opposition, but hopefully the MTA would follow the lead of the Second Avenue subway line and just go ahead with it, listening to community concerns but keeping their gaze pointed twenty years into the future.

Not only are local residents wary of any deviation from the status quo, but they worry about the cost, as well they should! 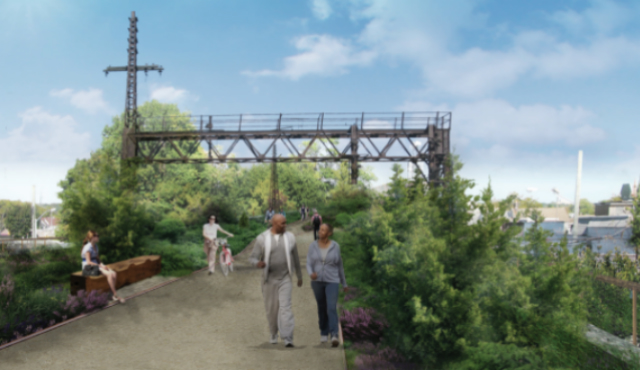 A rendering of the QueensWay / The Trust for Public Land

Where Is This Money Coming From?: The plan for the park puts the cost at $122 million. Even that amount seems unrealistic, especially considering the High Line cost close to $200 million, and the QueensWay would be much longer. Not only that, but the QueensWay serves a much less affluent community, meaning large private donations might be hard to come by.

So far, the Trust for Public Land has raised $1.2 million for the park. The QueensWay, the report states, would be built in phases, like the High Line. Unfortunately, like the Second Avenue Subway, a project that is not fully funded (or funded at all) might only achieve a single portion of the envisioned goal, leaving the rail line just as unused, save for a single section. The new subway line would also need a massive amount of money, but the federal government has shown a willingness to pony up for transit before parks.

Considering the city itself just made a massive investment in local parks in all five boroughs to the tune of $130 million, it seems unlikely that the mayor’s office would be that interested in shelling out another massive sum for a single park, or even a smaller amount to begin the project. As the mayor’s office told the Times about the project, “We look forward to continuing conversations with stakeholder about the future of this asset.” Not exactly a ringing endorsement.

The QueensWay seems like a really good opportunity for urban designers to make some beautiful renderings and get people talking about the use of public space. However, as an actual proposal, it’s unfeasible and, worse, irresponsible at this moment of growth in the city’s population.

Of course, twenty years from now when I’m sitting in my sweet condo overlooking the new hip neighborhood of Woodhaven, waving at my friends sunning themselves on the beautiful elevated lawn of the QueensWay, I might be singing a different tune.

Max Rivlin-Nadler has been a contributor to Gothamist since 2013. He has also reported for the New York Times, NPR, and The Intercept. His years-long investigation into New York City's arcane civil forfeiture laws led to a series of reforms which altered a practice that had been taking millions from poor communities for decades. Recently, he brought back a surfing habit from a few years on the west coast, and would love to see you all out in the Rockaways.