Term Limits Bill "Being Rushed Through" 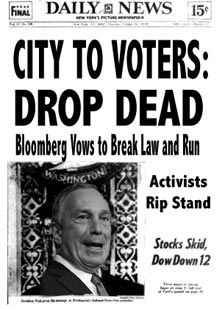 Yesterday, the City Council introduced the bill that would permanently extend term limits from two terms to three. The Daily News spoke to "opponents of the bill" who says the legislation is "being rushed through"--and may come up for a vote in two weeks. A source confirms to the Post, "They're really fast-tracking it because of the mounting opposition."

In fact, Ronald Lauder, who supports the concept of Mayor Bloomberg serving a third term but hates the idea of permanently extending term limits, may be wavering. And with Lauder and Bloomberg--both billionaires--figuring so prominently in the term limits narrative, it makes sense why State Senator Liz Krueger is a little annoyed at how the issue is being handled. She told the Observer, "No disrespect to either of them, but they’re two people. This is a city of eight million. Should two guys be the determining factor, rather than the actual public?”

City Council Speaker Christine Quinn's silence on the issue (she didn't make a statement to the press yesterday) is examined by the NY Times--Quinn seems to be caught between wanting to stay in Bloomberg's good graces and her colleagues. City Council member Charles Barron joined the growing chorus of City Council members against extending term limits by announcing he would not seek a third term and member Bill deBlasio is meeting with billionaire Tom Golisano about funding a referendum.

Update: Lauder just released a statement "reluctantly" supporting the Mayor's stance on term limits. Bloomberg and his team apparently convinced him that term limits would have to be permanently extended to three, versus a one-time extension till 2013.

And this image is from Billionaires for Bloomberg--check out their video about term limits after the jump.