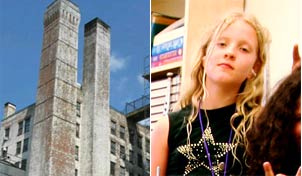 Some more details in the amazing survival of a twelve-year-old girl who fell 15 floors down a chimney shaft at the Westbeth Building in the West Village. The FDNY believes she owes her life to the two feet of soot at the bottom of the shaft.

The NY Times reports the girl, identified as Grace Berger, had been on the building's roof with a teen relative, when she climbed up a ladder and fell through the chimney, which "rises about 13 stories to the roof and then about two dozen feet above it, with a ladder to the opening of about five square feet." (A source tells the Post that Grace "thought it was a tower [for observation]. I think she wanted to show her [cousin] Manhattan.") Firefighters who responded to the scene were "shocked" that she was alive.

Lt. Simon Ressner said he "jumped back" when Grace's hand appeared through the door at the bottom of the chimney shaft. He said, "She was completely black. The only part we could see was her eyes and her mouth...I think she probably went down head first and landed on her back." He added that it didn't seem like anything broke her fall on the way down, because she wasn't scraped up (the girl reportedly suffered a dislocated hip and "other possible fractures"). Grace, who plays the drums in a rock band, is recovering at Bellevue.

The building's roof is reportedly available to residents until 10 p.m., and then access to the roof is supposed to be locked (the incident occurred before 11 p.m., it's unclear how Grace and her cousin were there). And the building super Angelo Guganti marveled to the Daily News, "It's a hell of a dive! The soot helped break her fall. I'm glad I didn't get the chimney cleaned."