Should The Brooklyn Cop Convicted Of Killing An Innocent Man Be Spared Prison?

Moments after Hortencia Peterson heard from a Brooklyn jury that the killer of her nephew, Akai Gurley, had been found guilty of second-degree manslaughter and official misconduct, she felt that something miraculous had happened: a cop had been convicted in New York City for the killing of an unarmed black man.

For weeks, she believed that justice had been served, and that Peter Liang, the rookie cop who had accidentally fired the shot that ricocheted off a public housing stairwell wall and tore though Gurley’s heart, would be facing up to 15 years at his sentencing, scheduled for April 14th.

“I was feeling very happy that we were going to have a sentencing,” Peterson told Gothamist. “I thought we had come so far, gone through the trial, and actually found justice on the other side.”

But on March 22nd, the Brooklyn District Attorney’s office, which had expended significant resources as well as political capital in pursuing a guilty conviction for Liang, announced that they would not be seeking any prison time at Liang’s sentencing on April 14th.

Instead, as DA Ken Thompson’s letter recommended to Judge Danny Chun, they would be satisfied with probation and six months of home confinement. For Peterson, as well as Gurley’s mother, this was devastating.

“It was a slap in the face, and since then, my sister hasn’t been able to sleep,” Peterson said. “They’re saying that it’s okay to murder someone because they’re a police officer.”

In New York City, it’s highly unlikely for a judge to deviate from a prosecutor’s recommendation, according to Steve Zeidman, Director of the Criminal Defense Clinic at CUNY Law School.

“If the prosecutor is not seeking jail or prison time then it is very rare for a judge to sentence someone to jail or prison,” Zeidman told Gothamist. “This case is very different given the context of a police officer killing an unarmed black man and the attendant media attention, but the question is whether that is sufficient reason for the judge to go down the seldom used path of overriding the prosecutor's sentence recommendation.” 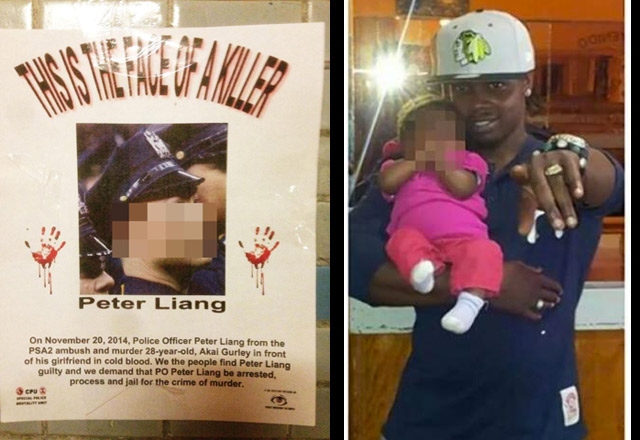 A photo of a poster hung in East New York's Pink Houses, where Gurley was shot and killed, which incorrectly identifies an officer as Peter Liang (via News); Akai Gurley (Facebook)

When District Attorney Ken Thompson was running for office in 2013, he told Gothamist that “the most important thing I’m going to do as District Attorney, is have one standard of justice for everyone in Brooklyn.”

The previous District Attorney, Joe Hynes, had often failed to bring charges against police officers who had engaged in misconduct. A similar incident in 2004, where a police officer had shot a man on a public housing rooftop, resulted in no criminal charges. From the days immediately following the Gurley shooting however, Thompson vigorously pursued a guilty verdict against Liang.

“I believe it was a political calculation by Thompson to get the verdict he wanted and then make a recommendation for no jail time,” says Robert Gangi of the Police Reform Organizing Project. “District Attorney, by its very nature, is a political office.”

Thompson's sentencing recommendation comes in the midst of a movement (backed by Governor Cuomo) for independent prosecutors when dealing with police shootings.

In his recommendation for Liang, Thompson admits to the special privileges that are bestowed on police officers, writing, “The People recognize that there are mitigating circumstances in this case. The defendant chose to become a police officer, and to put his own life on the line, because he wanted to protect the public.”

To organizations committed to the prosecution of police misconduct, this certainly seemed like a double standard, where a police officer was being given consideration another defendant wouldn’t be.

“The DA’s decision sends the message across the country that officers can continue to kill without being held accountable,” said Cathy Deng, the Executive Director of CAAAV, an organization that has supported the Gurley family throughout the trial. “I know this case is uniquely different from a lot of others, but not so much that it’s still the story of an officer walking away free from killing another black person in the United States.” 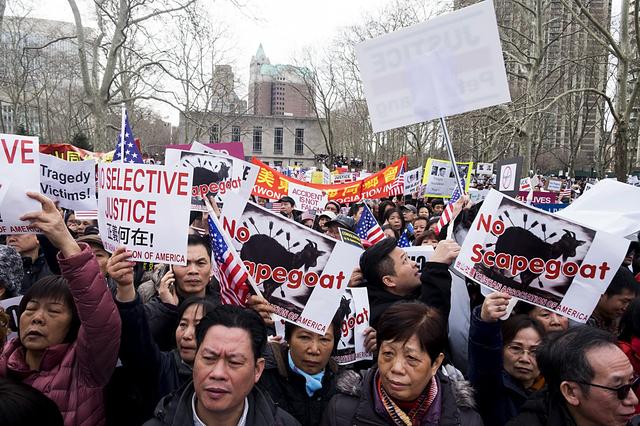 The week after the guilty verdict, 10,000 people gathered in Downtown Brooklyn and chanted “no scapegoat!,” as a petition appealing for leniency to Judge Danny Chun was passed around.

Many at the protest felt not only had Liang been abandoned by the justice system, but by his own union as well. The Patrolmen’s Benevolent Association, which has steadfastly supported officers accused of misconduct in the past, was noticeably absent at the trial.

Without support from either the NYPD—which has only one senior Asian official, and whose commissioner immediately labeled Gurley “a total innocent”—or his union, the defense believed that the deck was stacked against Liang when it came to trial, especially considering his own partner was testifying against him in exchange for immunity.

"I think the District Attorney made some mistakes, but someone did die, so if he gets probation, I think that's a home run," says Eddie Chiu, president of the Lin Sing Association, which helped the Liang family during the trial.

"Nobody knows what the judge will do. I think if I was the judge, and I had the recommendation from the DA, I would just let it go."

On Thursday, the final decision will lie with Judge Chun, who has served on the Kings County Supreme Court since 2005, and ably oversaw one of the most high-profile cases in the city’s history.

To sway the judge towards his recommendation, Thompson cited a recent case where an NYPD officer was found guilty of killing an unarmed individual. In this instance, undercover officer Bryan Conroy shot and killed a man during a raid in 2003. He was found guilty of negligent homicide and sentenced to six months of home confinement and three years of probation.

"I just saw Peter yesterday morning, he feels much, much better," Chiu says. "He's home, and all he hopes is he just doesn't go to jail."

Max Rivlin-Nadler has been a contributor to Gothamist since 2013. He has also reported for the New York Times, NPR, and The Intercept. His years-long investigation into New York City's arcane civil forfeiture laws led to a series of reforms which altered a practice that had been taking millions from poor communities for decades. Recently, he brought back a surfing habit from a few years on the west coast, and would love to see you all out in the Rockaways.