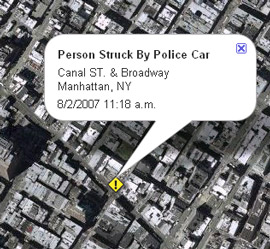 Yesterday morning, a 77-year-old Queens man walking in Chinatown was injured when he seemingly fell into the path of a police cruiser. Tong Hong had been walking with his adult daughter at Canal and Broadway and tripped on his flip-flops, sending him into the windshield of the cruiser.

Hong was bleeding profusely, and the Daily News says there was a "basketball-sized, spider-web crack on the driver's side windshield." However, one witness thought that the cruiser actually clipped Hong, who was at the corner, but the police say the cruiser was moving slowly. And another told NY1, "I saw the old man walking and he slipped and that's it. The car was driving like five miles an hour." Witnesses say the police helped Hong, and in fact, the Post has a picture of a cop holding napkins to Hong's head.

Hong is in critical condition at St. Vincent's. Canal is a street teeming with pedestrians and vehicular traffic, what with the bridge and tunnel crossings. Transportation Alternatives' shows many pedestrian fatalities along Canal between 1995 and 2001 on a map.