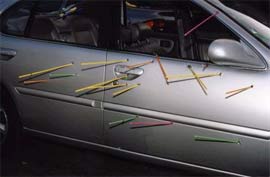 A police detective detailed photographing the aftermath of the Sean Bell shooting as prosecutors entered 80 photographs into evidence.

The Post called the photos "horrific" and "grisly," as many showed blood on the car's seats and police-fired bullets riddled in the side of the car. They caused Bell's mother Valerie Bell to look away while Bell's fiancee Nicole Paultrie Bell "showed no emotion, but occasionally shook her head."

One of now-retired detective Dave Rivera's photographs was of a lampshade in a home 30 feet away. The Daily News' Juan Gonzalez wrote, "The bullet pierced a window on the front porch, hit a lampshade near the window, got caught in the shade's fabric, then circled around to the other side of the shade, where it came to rest - bulging through the cloth material." Rivera also testified a bag of "green leafy substance" was found and that he did not find a "bubble light," a portable light that commander Lieutenant Gary Napoli claimed he was looking for during the shooting (it's hypothesized Napoli ducked).

The Queens DA's office says three undercover detectives, Michael Oliver, Gescard Isnora, and Marc Cooper, acted recklessly when they fired upon Bell and his friends, who were all unarmed. Oliver and Isnora face manslaughter charges, while Cooper faces reckless endangerment. A community activist was thrown out of the courtroom yesterday when he was filmed on camera telling the detective defendants, "Jack Ruby will be back. Bang, bang, bang."

The Post has a gallery of some of the photographs; a few are very graphic - there's one after the jump showing the bloodshed.