Roosevelt Island Will Be Swarming With Hillary Clinton Superfans On Saturday

Attention lucky RSVP-holders: Assuming you planned ahead and ordered your I ❤ Hillary tumbler in time for tomorrow's swarming campaign launch on Roosevelt Island, keep in mind that the presidential hopeful's security force won't let you past them with iced coffee.

That's because the scene at the security gate tomorrow morning will resemble nothing short of LaGuardia on a Friday afternoon. In fact, an e-mail that went out to attendees yesterday is explicit about the comparison: "airport style security" for all.

Likely, the News posits, because Bill will be there, too. (Not this Bill, but definitely the other one.) 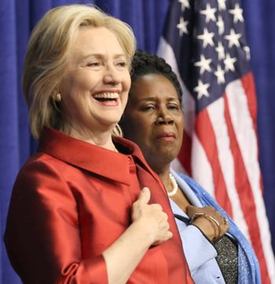 Once you get past the gate—and even that isn't a guarantee, it seems—you'll find a standing-room-only scene with bad phone reception, and little respite from the heat blanket that is enveloping us today and tomorrow and forever.

Nevertheless, “We’re excited about this event and we don’t have any concerns," an optimistic Roosevelt Island Corp. spokeswoman told the tabloid.

Those RSVP-holders still undeterred, take note: Doors open at 9:30 a.m., and things wrap up around 1 p.m.. You'll want to get there early, of course—the F train, the Q 102 bus, and the tram at both 59th Street and Second Avenue, will (eventually) get you there (the tram, which can fit 110 people per-ride, starts at 6 a.m. tomorrow, and will be running every 7 minutes, instead of the standard 15). Everyone else: avoid Roosevelt Island, and stream it online.

Roosevelt Islander has additional info from the RIOC (not that tomorrow is also Roosevelt Island day). And here's the email that went out yesterday, from the Clinton Campaign:

We can't wait to see you on Saturday at the Hillary for America official launch event -- we're so excited that you're going to be a part of this day! Here's some information you'll need ahead of time:

What to bring
- Your printed ticket -- the confirmation email you received when you registered for the event, you can also use your phone to show your ticket. Children under the age of 13 do not need a ticket to enter the event.
- Small personal cameras and cell phones will be permitted.
- Guests are encouraged to bring water in standard-sized, clear plastic bottles, as there will be a limited supply at the event.

What not to bring
- There will be airport style security. Items that will NOT BE permitted include food, liquids other than water, large bags, large purses, backpacks, strollers, umbrellas, noise makers, bullhorns, posters, signs, pets other than licensed service animals, sharp objects, or weapons.

What to expect
- Limited cell service on Roosevelt Island.
- The event is standing only -- seating will be provided for ADA guests.
- Food is not permitted in the park, so make sure to have breakfast before you arrive.
- Be prepared for a hot summer day; sunglasses, sunscreen, and comfortable shoes are highly encouraged.

How to get to Four Freedoms Park
The best way to get to the park is by public transportation -- parking on the island will be extremely limited.

- Tram: From Manhattan: Get on the tram at 59th Street & Second Avenue Station. Travel time to Roosevelt Island is 4-5 minutes, with trams departing every 10 minutes. Exit at Tramway Station on Roosevelt Island. Follow signs to Four Freedoms Park.

We want to accommodate as many ADA guests as possible, so if you know that you will need assistance on-site, please contact ADAseating@hillaryclinton.com to make necessary arrangements. ADA guests are welcome to bring one guest with them into the ADA section.

This is going to be a great event and we're thrilled to have you -- one of our best supporters -- there as we launch into the next phase of this campaign.