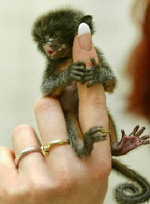 In August, we were amused - and frankly startled - to hear that a monkey was on the loose at Laguardia Airport. It turned out a passenger from Peru had stowed a tamarin monkey under his hat, on his flight to New York.

The primate went unnoticed until in the air, and once found he spent the flight on the lap of the passenger (who "didn't know" it was illegal to bring him along). The little fellow bolted once the plane landed in Laguardia, but was quickly recovered, he and his owner were detained by authorities, and the authorities took the animal.

Sad news comes in this week as the CDC announced the monkey had died in its custody. A CDC spokeswoman said the "tamarin showed no signs of illness during a quarantine period" and that the agency had been trying to find the monkey a home. However, we have to agree with one Daily News commenter, who exclaimed, "Why wasn't this monkey in the care of a zoo or someone who was qualified to care for monkeys? The Feds are nothing but a bunch of incompetent buffoons!"

The News also revealed the monkey's mule, Manhattan resident Rolando Pinedo, had been released after claiming he didn't realize smuggling a monkey into the country was illegal. Um, right - that's why the monkey was hidden in his hat!