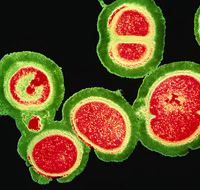 The health scare of the season continued this week with news of an outbreak of the methicillin-resistant staphylococcus aureus (MRSA) "superbug" at an Upper East Side hospital's children's ward. The New York-Presbyterian Hospital/Weill Cornell Medical Center said that nine infants were infected with the drug-resistant strain of bacteria that killed a New York 7th Grader last month. Omar Rivera Jr. was felled by the staph infection on October 14th after being misdiagnosed at Kings County Hospital. His family has filed a $25 million lawsuit against the hospital for alleged mistreatment of the 12-year-old.

According to the New York Post, the outbreak of staph infections at the Upper East Side hospital actually pre-dated Rivera Jr.'s death. New York-Presbyterian Hospital/Weill Cornell Medical Center reported to the state health department that nine infants were infected and a dozen other newborns were diagnosed with exposure to MRSA, but did not become ill. The hospital immediately informed parents of their children's condition and advised on how to prevent bacterial transmission, primarily through good hygiene and regular hand washing.

Nosocomial infections, however, are those contracted during time in a hospital. The Post wrote, "A report out last month found that MRSA caused an estimated 94,000 serious infections in 2005 and nearly 19,000 deaths. " Most transmission of MRSA bacteria is caused by inadequate hygiene procedures among healthcare workers.