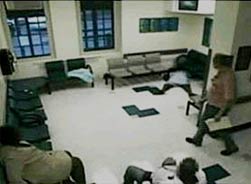 After a surveillance video showed hospital staff ignoring a psychiatric patient's last dying hours in the emergency room of Kings County Hospital, city health officials say they will make a series of changes, like checking on patients every 15 minutes.

When asked what he thought of the video, Mayor Bloomberg said, "Horrified is much too nice a word. Disgusted, I think, is a better word." The patient, 49-year-old Esmin Green, had been waiting in the ER for almost 24 hours before falling to the ground and writhing. Though staffers, including two security guards and a doctor, saw her on the floor, they did nothing.

Six staffers have been fired, including the guards and doctor. After Green died, hospital records claimed she had fine during other checks, suggesting a cover-up. (See the NYCLU's description of what happens on the video compared to the hospital "records" after the jump.)

NYC's Health and Hospitals Corporation also settled a previous lawsuit from the NYCLU and other parties which claimed Kings County of horrible conditions. NYCLU executive director Donna Lieberman said, "That it took somebody keeling over and dying, and it being captured on videotape, for the city to come to the table in a meaningful way is unconscionable."

Green was described as having a nervous breakdown; her pastor said she was the sole supporter of her six children in Jamaica by working as a housekeeper and day-care worker here. Per the Daily News, the city says it will pay for Green's funeral expenses.

Above is video and below is about an hour of the NYCLU's log of the video; the bolded parts the hospital's records:

In the Bronx, Republicans and Democrats alike take aim at relief center for migrants

There was no welcome wagon at Orchard Beach, where the Adams administration plans to house up to 1,000 asylum seekers temporarily.

By
Arun Venugopal
In the Bronx, Republicans and Democrats alike take aim at relief center for migrants

There was no welcome wagon at Orchard Beach, where the Adams administration plans to house up to 1,000 asylum seekers temporarily.

By
Arun Venugopal
Cold, rainy weather will stick around in NYC, thanks to tropical moisture brought by Hurricane Ian
By
Catalina Gonella
NYC delivery workers may soon have city-run spaces to rest and recharge their e-bikes
By
Rebecca Redelmeier
Afternoon Addition: New York is 4th largest wine producer in US, but the city prefers it from France
By
Brooks Brunson
Get the news New Yorkers need in your inbox