Yesterday, the Connecticut Working Families Party organized bus tours of AIG's Wilton office as well as the homes of various AIG executives, just as Connecticut Attorney General said, based information he received, the bonuses given by the bailed-out firm were around $218 million, $53 million more than previously reported. Protesters yelled "Bail out Main Street, not Wall Street" outside the office," while holding signs like "Dude, Where's My Life Savings?" 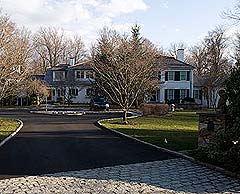 The bus tour of the lives of the "Rich and Infamous" stopped by AIG executive Douglas Poling's home, who reportedly received a $6.4 million bonus. AIG said Poling was planning on returning the bonus, which the activists said they appreciated.

Security guards allowed them to place a letter in Poling's mailbox, and community activist Asaad Jackson read it aloud, "Now that we have had a chance to see your community"—which the Times noted is in one of America's wealthiest counties— "we would like to invite you to visit ours... You can meet with some of the people who experienced the brunt of the economic downturn firsthand like Willie Alice Huguley, of Hartford, who at the age of 83 is worried about losing the only home she has known to foreclosure." Connecticut WFP director Jon Green told the NY Times, "It was never the intent to have any sort of mob action. It’s a tour. It’s a chance to see what these residences are like, and to point out that there’s families who are experiencing this recession in a different way."

But could the tide over the AIG hysteria be turning? Chris Matthew's Sunday morning program referenced David Brooks' Friday Times op-ed: "The Washington political class has spent the past week going into made-for-TV hysterics over $165 million in A.I.G. bonuses. We’re in the middle of a multitrillion-dollar crisis, and our political masters — always willing to throw themselves into any issue that is understandable on cable television — have decided to risk destroying the entire bank-rescue plan because of bonuses that account for 0.001 percent of the annual G.D.P."