Need a little good news in your life? I would imagine you do, given the constant unyielding nightmare that is life even when Cheeto Mussolini isn't the president. So, here's some good news, although it's a very thin sliver of good news: it costs $10 million less than was originally projected for the city to protect Trump Tower. Yay?

When Bill de Blasio originally asked Congress to cover the cost of protecting Trump Tower, he asked for $35 million, which the legislative body then countered with, "Hey how about $7 million?" Congressional Republicans said they wanted some proof that de Blasio wasn't just doing lazy back of the envelope calculations, and as it turns out, he was off by about $10 million. The AP reports that after totaling up the cost for the NYPD and FDNY presence at the building, Police Commissioner James P. O'Neill put a $25 million price tag on protecting Trump Tower between Election Day and Inauguration Day. O'Neill came up with the number after going over payroll, patrol logs and overtime requests, according to the NY Post.

O'Neill wrote to Congress to ask them to reimburse the city for the $25 million they spent over that time, and also told them that "Trump Tower itself now presents a target to those who wish to commit acts of terror against our country, further straining our limited counterterrorism resources," the paper also reported. 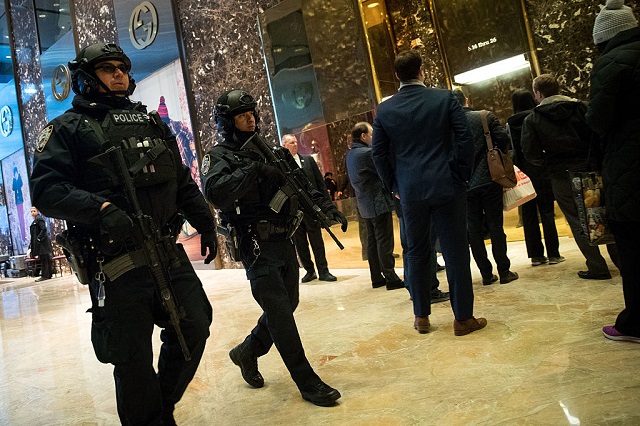 At the moment, it costs the NYPD between $127,000 and $146,000 per day to guard Trump Tower as Melania and Barron Trump live there. However, after feverish speculation that she wouldn't be moving to Washington, Melania announced that she would relocate to the nation's capital this summer. According to the AP story, it costs $308,000 per day to protect Trump when he's in town, though he's mostly stuck to spending his weekends in Mar-a-Lago, definitely not doing any public business with wealthy parties who've bought access to him.