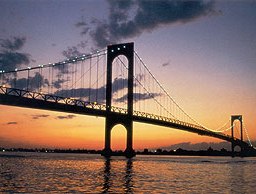 The MTA Bridge and Tunnel police noticed that a truck had an "unstable load" and asked the driver to pull over yesterday. Inside the rig, the cops discovered 210 pounds of marijuana.

The Daily News reports that the seven bricks of marijuana were hidden among "pallets of shredded coconuts" (and there is a reference to the driver being 'coco-nuts'). And the Post says the driver claimed he was headed to Long Island, but the cargo had a NJ address. D'oh!

The street value of the stash is about $300,000. The Whitestone Bridge connects the Bronx and Queens. It was completed in time for the 1939 World's Fair and served as the gateway to the "World of Tomorrow," according to the MTA.