Thanks to global heating and sea level rise, New York City says it will have to close all 45 acres of East River Park for three whole years beginning next spring, in order to raise it up by eight feet. New Yorkers who use that park's ball fields will have to go elsewhere, and some of them will end up in Tompkins Square Park, where the Parks Department says they are planning on putting artificial turf over Tompkins' northwest blacktop. This in turn will displace the street hockey league, and the many skateboarders who frequent the space.

Black Top Street Hockey league, which has more than 400 members, uses the surface most Sunday afternoons from the spring through the fall.

"It'll be okay, we're working with the Parks Department to find a spot in this area, below Midtown but above Lower Manhattan," said Morgen Schroeder, one of BTSH's board members. "We're just a bunch of goofy people who like to get together and chase an orange ball around. We can do that anywhere. This spot is more of a holy ground for the skaters than the hockey players." 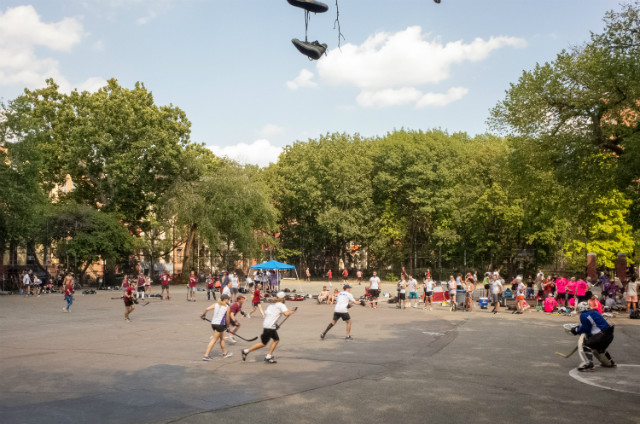 A Change.org petition to "Save The Tompkins Square asphalt!" has more than 28,000 signatures.

Will Lee, a skateboarder who has frequented the Tompkins TF ("training facility") since 2002, said that the space was distinct and friendlier than a typical skate park (Gothamist previously rounded up six of the best ones here).

"The vibe is different. For me, the skate parks, it's like going to a gym, it's real intense. Going to Tompkins, it's like going to the pool. It's chiller, you're having fun," Lee said. "There's also neighborhood people there with their kids throwing their ball around. It serves as a place to go and not get hassled and skate all day if you wanted to, and get good. It's less pressure."

Rashaad Defreitas, 19, who was skating at Tompkins on Monday afternoon, said he first started skating there four years ago.

"Man, this is such a great place to just come skate and just enjoy a good time. There’s not many places that are unique as much as Tompkins Square, that’s why I like coming here often," Defreitas said.

"There’s also many people here who also have other interests outside of skating. They also bring a lot to the community. Like art, music, and other cool stuff that makes Tompkins unique aside from the skateboarding aspect."

Ary Yafat, a 17-year-old student at St. Johns, explained why he felt comfortable skating at Tompkins.

"People don’t really care if you’re good or bad. There’s a lot of anxiety around that, when you’re trying to learn how to skate. You want to look good so that you can, I don’t know, be a part of the scene," Yafat said. "Here it doesn’t really matter."

Lee said that the only other Manhattan skate spot that was comparable to Tompkins is the Brooklyn Banks underneath the Brooklyn Bridge, which has effectively been shut down to skaters since 2010.

"It never really works out for the skaters," Lee said. 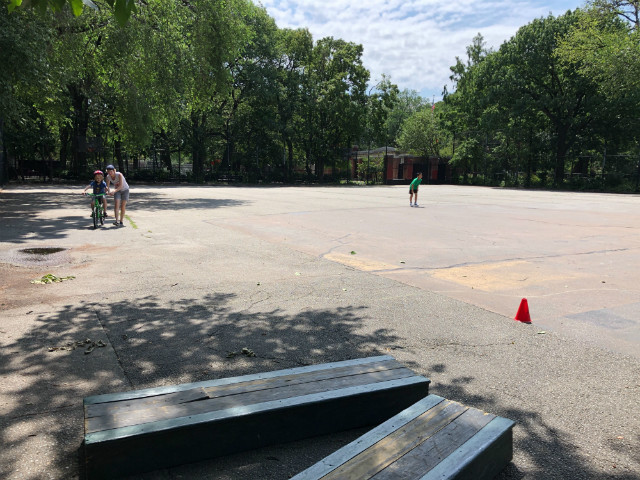 Howard said that the work to turf over Tompkins TF is slated to begin in "Spring 2020." She referred questions about the possibility of reopening Brooklyn Banks to the Department of Transportation, who has not yet responded to our request for comment.

Charlie Dawson, 21, who was skating Tompkins for the first time on Monday, said it'd be "awful" if the city turfed over the spot.

"That would suck. It’s a great place to skate. Everytime I come by here there’s people here skating, and enjoying themselves meeting other people, talking, having a great time."

With reporting from Adwait Patil.