Police are investigating a series of swastikas that were spray-painted onto multiple building around the heavily Orthodox Jewish area of Borough Park in Brooklyn. At least six buildings—including at schools and delis between 44th and 48th Street, near 16th and 18th Avenues, and a synagogue on 46th Street—were vandalized with the graffiti. "It's very scary, they have the guts to come and do that," 70-year-old Moseh Liebermann told the Post. "They start with the synagogue and then they will go to everybody's house."

City Council member David Greenfield said that there is a $1,000 reward for any information regarding the graffiti. "I've never seen anything like this," Greenfield said. "This is the largest Jewish communtity in the United States and largest community of holocaust survivors and they have to be greeted by this symbol of hate. It's just shocking and appalling." Greenfield added that surveillance video showed two young men who appeared to be in their 20s spray-painting at those locations. 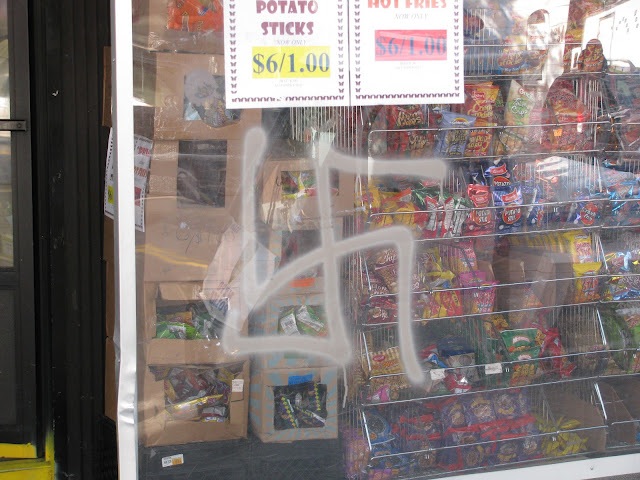 Assemblyman Dov Hikind also condemned the perpetrators: “What kind of sick person does this in a neighborhood of Holocaust survivors?” he asked on his website. “This is yet another example of the type of hate crimes that result from bigoted rhetoric. There will be no tolerance for hatred here and our community will address this from top to bottom. We’ll show that we’re serious about prosecuting criminals who would hurt us with their vile actions.”