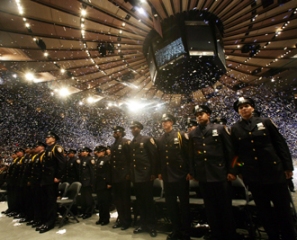 Yesterday afternoon, 1,097 police cadets graduated from the Police Academy in a ceremony at Madison Square Garden. The Mayor said, "Just a few weeks ago, the FBI reported that violent crime went up in the rest of the nation during 2006, but here in New York violent crime decreased. The NYPD has continued to drive violent crime and property crime down to historic lows this year - and year after year. Today we welcome 1,097 men and women into the ranks of our Police Department to continue the proud tradition of New York's Finest."

The class is pretty diverse - 27% Hispanic, 16% black, 7% Asian and 50% white - and 18% are female. However, after the ceremony Police Commissioner Kelly expressed his concerns about the low starting pay of $25,100 and how that's effecting recruiting. About 16% of recruits dropped out while at the academy, which Kelly said was unusually high: "Our numbers are clear: We had no issue recruiting when the salary was competitive, $40,000 in 2005. When the salary went down, that's when our challenges set in....Common sense, in this most expensive city in the world, people are willing to sacrifice to become police officers. We understand that nobody becomes a police officer to become rich, but you have to live."

Take a look at the much high starting police salaries outside of NYC - the city has blamed the police unions for hurting salaries during negotiations. One problem may be that Operation Impact, the city's lauded program to fight crime, may not have as many officers to keep the city's crime numbers down.

And the valedictorian was Cheryl Walter, who has an undergraduate degree from Harvard and a master's in forensic psychology from John Jay College. She considered joining the FBI but told the Sun she chose the NYPD because "I'm not into office work. I like being out on the streets and talking to people." Officer Walter's first day will be patrolling the Bronx.