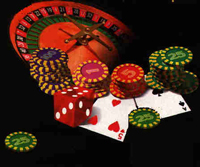 An illegal poker game in the Flatiron district may cost a participant his life after he was accidentally blasted with a shotgun during a hold-up. Three robbers crashed the game shortly after 11 p.m. last night and ordered the players to dump their cash on the table for collection. The illegal club was operating a game out of an office on the 7th floor of 251 5th Ave.

The three gunmen, who identified referred to themselves during the robbery, as "One, Two, and Three," would have made a cleaner getaway if one of them hadn't nervously dropped his sawed-off shotgun and then accidentally fired it while picking it up. The shot struck one unlucky gambler in the abdomen. The 47-year-old injured man was taken to St. Vincent's Hospital where he was pronounced dead.

The trio of bandits escaped with thousands of dollars and police made no arrests in the armed robbery and shooting. Neither the Daily News nor the New York Post mentioned whether any of the poker players would be charged with illegal gambling. According to the WCBS TV report, there were four masked gunmen who conducted the hold-up and the man who was shot was 55 years old, not 47.