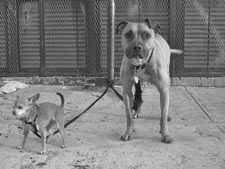 Following a string of horrific attacks by pit bulls on civilians, one pit bull has actually turned hero. In an incident that occurred early Thursday morning, a stranger punched his way through the half-gated window of a young woman's bedroom in Rockland County--across the Hudson River and a few miles north from NYC. The assailant, apparently intent on raping the woman, climbed onto her bed and proceeded to punch her in the face several times.

During the struggle, the victim managed to open the door to her bedroom and allowed the entrance of her pit bull pet. Spring Valley Police Sergeant Lou Scorziello said "I would imagine that dog was the equivalent of pointing a gun at him. He was scared and ultimately was the reason why he left." The suspect is described as a Hispanic male in his early 20s, around 5'6".

In the last week, questions about the pit bull breed were raised after pit bulls nearly killing an elderly man and ripping the ear off a young child's head in an attack meant for the child's mother.