Photo: This Is The Official NY State 9/11 Flag 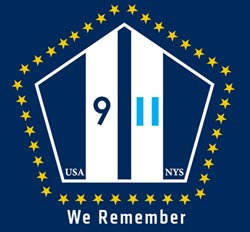 Today, Governor Andrew Cuomo unveiled the official 9/11 Memorial Flag. A press release explains, "The symbols on the flag evoke what was lost on September 11th and what still endures. The 40 yellow stars represent the fatalities from United Flight 93, which crashed in Shanksville, Pennsylvania. The five-sided figures represent the Pentagon, where 125 people died. At the center of the flag are the Twin Towers, where the greatest loss of life occurred that day."

The flag will be flown at State Capitol and at the World Trade Center for the 10th anniversary of the attacks. Cuomo said, "The Memorial Flag is meant to serve as a long-lasting symbol of our respect for those who were lost on September 11th and our resilience in the face of tragedy," Governor Cuomo said. "Written on the flag are the words 'We Remember' - we remember the faces, the stories, and the heroes of that day and this flag reminds us to always pass on those memories to future generations." And National September 11th Memorial & Museum President Joe Daniels said, "The flag will serve as a symbol of our resilience in the wake of unimaginable events. This tribute to the victims of the 9/11 attacks also reminds us of the indomitable spirit of New Yorkers that endured that terrible day and in the years since."

According to the Daily News, the flag will be sold, with proceeds going toward raising funds for the Memorial.