Palin the Pitbull Begins to Break Off Her Tight Leash 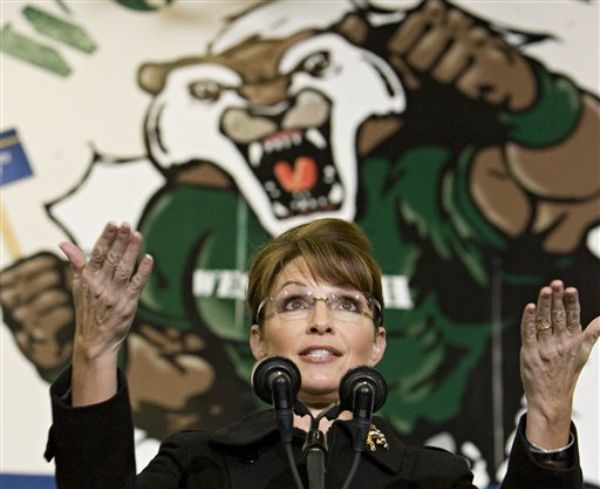 Photograph of Sarah Palin on the campaign trail from the AP

Dissension within the McCain campaign has begun spilling over into the public with campaign aides speaking out about Sarah Palin taking her cues less and less from within their camp and instead deciding to "go rogue." The rift appears to be pretty sizable with one aide telling CNN, "She is a diva. She takes no advice from anyone...Remember: Divas trust only unto themselves, as they see themselves as the beginning and end of all wisdom."

Palin is allegedly uncomfortable with the limitations put on her by campaign operatives and delivering her own message how she sees fit. "She's now positioning herself for her own future...It looks like no one is in charge," an adviser told CNN. Some recent examples they cite of Palin going "off the reservation":

Palin is said to be particularly unhappy with how little media interaction she was able to have in her first few weeks as the nominee and subsequently how much damage was done by the two primary interviews that thrust her into the spotlight, with Charles Gibson and then Katie Couric. But if the governor isn't happy with the response to what was seen as her gaffes in those interviews, the McCain camp isn't going to take the hit on it. One adviser familiar with prepping candidates said it was probably the "hardest" to get her "up to speed than any candidate in history."

An article on the course of McCain's campaign since winning the Republican nomination in today's NY Times Magazine puts in focus McCain's process in selecting Palin and more than ever brings to light just how little the senator knew about his running mate beforehand. One staff member said, “She just wasn’t one of the names. I mean, we heard more about Bloomberg.”