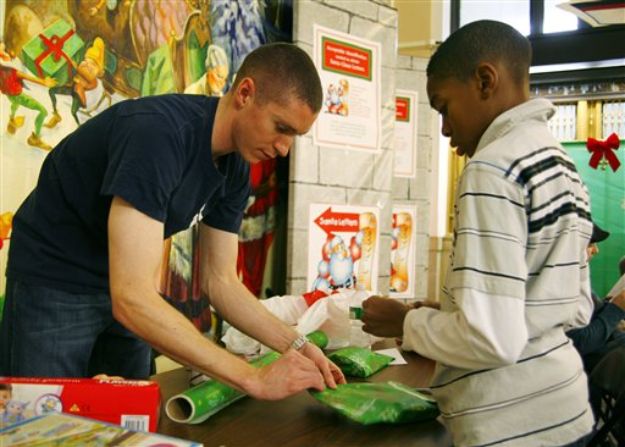 The US Postal Service reopened a newly modified Operation Santa Claus yesterday after it had been temporarily shut down earlier this week following a "breach of security" when a postal worker discovered that a registered sex offender in Maryland "adopted" one of the hundreds of thousands of letters to Santa sent in by needy children this holiday season.

Those who showed up at the James Farley Post Office on 8th Avenue yesterday now discovered the letters marked up with crossed out last names and addresses, preventing the potential for a face to face meeting between volunteers and the children who write in. In an amusing coincidence, the timing of the unfortunate incident leading to the changes came just a week after last week's 30 Rock storyline where Liz Lemon took part in a similar program and ruined two young boys' Christmas when she showed up at their house to hand deliver the gifts and receive full validation for her act of charity.

Unlike the desperate Lemon, most secret Santas Saturday naturally didn't seem to mind. But the alterations did seem to take a little bit of the magic out of the process as the Times described someone going through a prescreened list "line by squiggly line, through and around blacked-out sections that looked more like a classified F.B.I. document than the wish list of a 7-year-old girl."

The post office will have to take on a significant amount of extra work, having to deliver all of the gifts that arrive to them from volunteers wrapped with a "recipient control number." Last year the USPS received over 500,000 of the letters, many of which include sobering requests for things like clothing, food or one little boy's simple wish for some Pokemon cards and a prayer for his mother who had recently passed away.