Macy's 4th of July fireworks display is back by the Brooklyn Bridge this year for the first time since 2014, and there are seven recommended public viewing areas in Lower Manhattan, as well as spots in Brooklyn Bridge Park. Elevated sections of the FDR will be turned into viewing platforms, but Piers 16 and 17, which are closest to the action, will be closed to the public by order of the NYPD—unless you can afford a $492 ticket to a July 4 party at The Fulton by Jean-Georges, or have scored a ticket to a VIP party on the roof of Pier 17.

Schmancy parties and exorbitantly priced cruises are a July 4th mainstay. ("Macy’s is not aware of and does not approve, endorse or participate in these events/activities," the department store states on their website.) At Brooklyn Bridge Park's Pier 6, the floating restaurant Pilot is selling a seat at the bar on July 4th for $375, or you can rent a slip at the Brooklyn Marina (four night minimum).

But the public is supposed to be able to enjoy Pier 17 whenever it is open, per the original land use agreement its developer, Howard Hughes Corporation, made with the city.

In order to obtain special permits and authorizations, Howard Hughes agreed to keep the 83,000 feet of outdoor space open to the public 24 hours a day, though according to a 2017 version of the agreement, it "may be closed to the public to the extent reasonably necessary in the event of an emergency or hazardous condition," or in consultation with the NYPD or the Department of Buildings.

Pier 17's roof access "may be limited from time to time when the roof is used for private parties, corporate events, and other special events," the agreement states, but at least 10,000 square feet of space on the roof "will be open to the public without charge or fee at all times when the building is open...and will not be subject to closure for [private events]."

The city's Economic Development Corporation, which administers the lease for the Seaport, said that Howard Hughes has coordinated access to Pier 17 for NBC, which is broadcasting the fireworks, and that while the pier is technically closed to the public, tenants like The Fulton by Jean-Georges can host ticketed events. 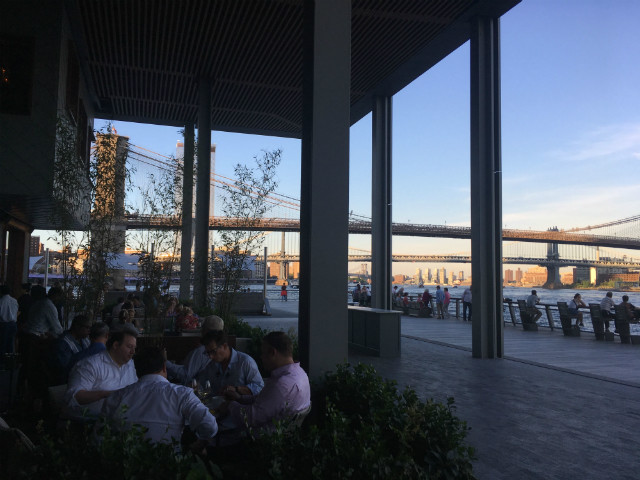 The Fulton by Jean-Georges on the left, public space on the right (Gothamist)

Asked if a ticket to The Fulton was the only way to get onto Pier 17 to see the fireworks, a Howard Hughes rep responded with an invitation to the VIP party on the roof.

We haven't gotten a response to our follow-up questions.

“This appears to violate if not the letter, the spirit of the agreement, and I urge the Department of Buildings to look into it,” Comptroller Scott Stringer, who signed the land use agreement as Manhattan Borough President in 2013, said in a statement to Gothamist.

"We were really looking forward to the fireworks coming back downtown," Stacey Shub, a longtime resident of the South Street Seaport and a critic of Howard Hughes' developments, told us.

"I went to [Pier 17's] website and was welcomed with all these fun and games and things, but although there is a Jean-Georges event with a special viewing area for the fireworks, the pier will be shut down to the general public," Shub said. "I don't think that's fair, I don't think that's what they agreed to."

Roland Lewis, president and CEO of the Waterfront Alliance, whose offices are near Pier 17, said it was "easy to point a finger at Jean-Georges and Howard Hughes for that matter, but it's the city's responsibility to negotiate and then enforce" agreements that guarantee public access to public spaces.

Lewis had a suggestion for New Yorkers who want to see the fireworks without dealing with massive crowds and pricey tickets.

"One year I kayaked in the middle of Jamaica Bay and I could see the New York fireworks from a long distance," he said. "I advise all people to do that sort of thing."

[UPDATE] On Tuesday afternoon, a spokesperson for Howard Hughes responded, "This is an official Macy’s event and Howard Hughes does not control access to Pier 17 for the 4th of July Fireworks. Anything east of South Street will be fully controlled by NYPD and the United States Coast Guard."

While spectators can stand on the cobblestone streets on a first-come, first serve basis, the spokesperson said that the NYPD will be blocking off everything east of South Street "to ensure the safety of the public," while Piers 16 and 17 are accessible to credentialed guests of Macy’s.

"However, in an effort to provide access to the local community, Howard Hughes has invited our neighbors to view the fireworks free of charge aboard the historic Wavertree which we have rented for the evening by making a contribution to the South Street Seaport Museum. The boat capacity is limited to 300 people," the spokesperson said.

"We are happy to have our community members join the event and are excited to celebrate this and other events throughout the summer at the Seaport."

You can read our followup story, published on Wednesday, here.