More than two years after Governor Andrew Cuomo declared victory in the Fight for $15 campaign, an initial group of New York City's lowest paid workers will finally see the promised figure reflected in their paychecks.

Starting on December 31st, employees at New York City businesses with more than 10 workers will be the first to reach the full $15 minimum wage, which is being implemented in phases throughout the state. The city's smaller businesses still have another year to offer the hourly wage, while all employers on Long Island and in Westchester get until 2021. The remainder of workers in the state will see the wage floor lifted to $12.50 in two years, at which point the minimum wage will increase at a schedule to be determined by the state, until it hits $15...eventually. 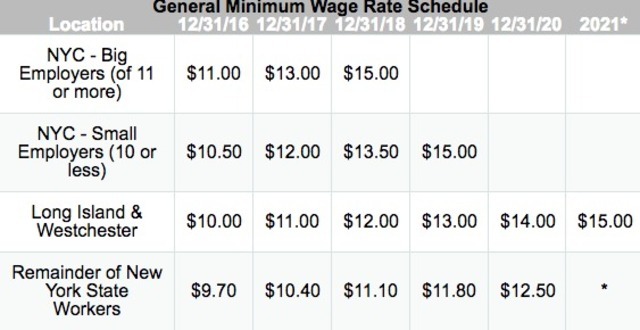 "With the historic increase in the minimum wage, New York continues to set a national example in the fight for economic justice," the governor, who sneered at a $15 minimum wage increase just three years ago, said in a statement. "In New York, we believe in a fair day's pay for a fair day's work and are proud to be stepping up for hardworking families and making a real difference in the lives of New Yorkers."

At businesses that employ tipped workers, employers will be able to apply some tips toward their minimum wage obligation through a formula that varies by industry. Employers will also be required to pay tipped workers overtime hours at time-and-a-half the minimum wage rate. (A proposal to end tips altogether is currently under consideration at the state Labor Department, though it faces opposition from major stakeholders, including the New York City Hospitality Alliance, a coalition of industry business owners.) 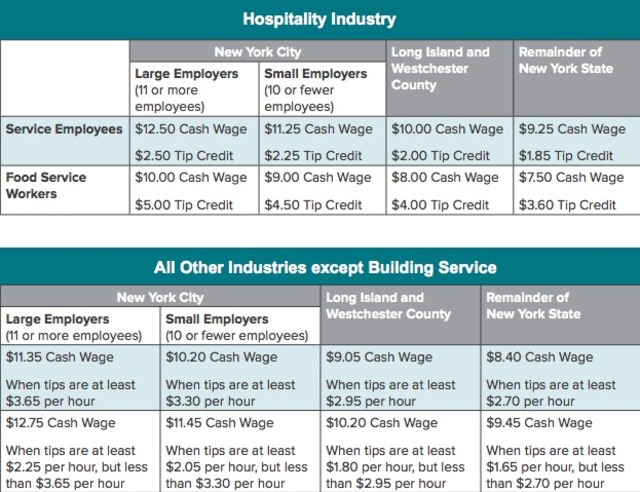 Recent years have brought significant gains across the country for the Fight for 15 movement, which was started by fast-food employees who walked off the job in New York in 2012. As a direct result of that organizing, some 22 million low-wage workers nationwide will benefit from an estimated $68 billion in annual raises, according to a study published last month by the National Employment Law Center.

So far, major cities that have implemented the $15 minimum wage, including San Francisco and Seattle, have not seen the significant job losses predicted by some business owners and economists. As Jacob Vigdor, a professor at the University of Washington who studies the impact of wage increases, explained to the Associated Press: “The general sense is that the fears of what a higher minimum wage might have done to business were exaggerated. I think it’s also fair to say the hopes of what a minimum wage might have done to workers were also exaggerated."

An earlier analysis from Comptroller Scott Stringer anticipated that raising the minimum wage to $15 in New York City could boost wages by $10 billion a year and benefit nearly 1.5 million workers. The report also predicted that the $15 rate would save taxpayers $200 to $500 million a year in food stamp and Medicaid spending.

Alongside the coming wage hike, the governor is also promoting a Wage Theft Hotline (1-888-4-NYSDOL) for workers to report employers who refuse to comply with the new minimum wage. According to a report issued last year by the Economic Policy Institute, New York has the third-highest rate of minimum wage violations of the 10 most populous states, with immigrants and tipped workers among the most vulnerable. As we noted in an investigation published earlier today, nearly 25 percent of New York City diner workers believe their bosses are paying them illegally low wages.

Those unsure of whether they've been receiving the legally mandated minimum wage, or how the hike will affect them in the future, can use this state-provided lookup tool to check their legal wage status.

Jake Offenhartz is a general assignment reporter. In his five years at Gothamist and WNYC, he’s covered policing, transportation, local politics, climate change and and all manner of New York City oddities. He lives in Manhattan, and enjoys bikes, pickup basketball, and city beaches.