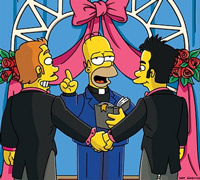 A New York State appellate court ruled that under the federal concept of the "marriage recognition rule," which grants reciprocity to the bond of marriage formed in other states, it will recognize gay marriages solemnized in other states. As one of the largest states in the nation, this is a huge step for proponents of normalizing same-sex marriages. Gay marriages still aren't allowed in New York State, although a young mayor in New Paltz, NY attempted to go forward with that initiative, but marriages performed elsewhere will be granted legal status. It's a bit of legalistic court-leading-the-horse, but gay rights proponents seem pleased.

State Attorney General Andrew Cuomo said that he was unaware of any decision on such matters, but stated that it was his job to defend state agencies, so if he fights the decision, it's only because his arm is being twisted (wink, wink.) Mayor Bloomberg's office also said that it had heard nothing about the appellate court ruling, although he vetoed a council-backed law that would have required companies operating in NYC to recognize same-sex unions because he had to support the laws of the state. In agreement or disagreement, we have to at least admire the appellate court judges for not feigning deafness in the matter of same-sex unions.