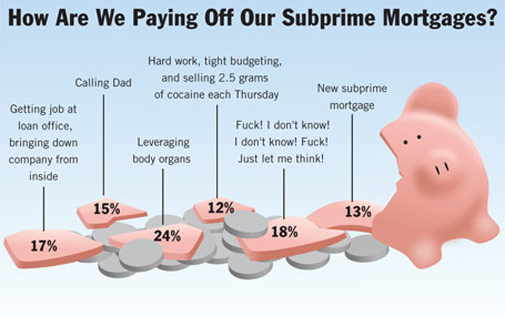 After a week in which the stock market reeled wildly due to concerns about the potential impact a collapse in mortgage debt could have on the economy, The New York Times examines the city's housing market and it's apparent imperviousness to downturn. The paper describes how despite a slump that was more of a pause in the second half of 2006, real estate sales and development continue to surge to this day, with property values reaching astronomic levels.

On the national level, sales of existing homes slowed by 17 percent in the second quarter of 2007, compared with the second quarter of 2006, while inventory swelled by 16 percent, according to figures provided by the National Association of Realtors. New homes fared even worse: they fell by almost 19 percent, according to Commerce Department figures.

In Manhattan, by comparison, sales of new and existing apartments more than doubled. In a trend that could shift quickly in light of the recent problems in the credit and stock markets, inventory shed a third of its bulk. It dropped to 5,237 units, despite the influx of several thousand new condos, according to Miller Samuel Inc., the Manhattan appraisal company.

What's most striking about New York's real estate market is the stark contrast in which it stands to the rest of the country. The head of the nation's largest mortgage lender said the market has not faced circumstances as bleak since the Great Depression. Simultaneously, the average price of a Manhattan apartment increased 16.5% year over year during the second quarter of 2007.

How is it that New York's real estate market is so resilient, while much of the rest of the country's markets are foundering? Contributing factors include:

A broker quoted in the Times story relates how "best and final" offers are neither, and that there is no deal too far along to undo if a higher bidder comes along. "You remind sellers that there is a moral component, but my duty is to get the highest amount, and ‘moral’ and ‘the highest amount’ don’t necessarily overlap." We wrote last week about a planned remake of John Carpenter's classic Manhattan-as-prison film "Escape From New York." He may want to re-develop it as "Entrance to New York" to approximate the challenges of the current real estate market.

(Illustration from The Onion via real estate site Matrix)