Frustrated bus riders who feel like their commutes are becoming more miserable by the day can now see how their bus route stacks up against other routes in the city, thanks to a new interactive website launched today by Bus Turnaround, a coalition of transit activists who are urging the MTA and NYC Department of Transportation to improve the city's ailing bus system.

The interactive site allows users to select any of the city's 307 bus routes and see their average speed, daily ridership, and frequency of bunching, i.e., when your bus is running way behind schedule and suddenly two buses arrive at the same time.

Tabitha Decker, director of the New York City branch of the Transit Center, a think tank and part of the team that developed the site, told Gothamist that transit advocates are hoping it will push the MTA to make reforms to the bus system, which is among the slowest in the country and is steadily losing ridership.

"Riders who rely on buses know they're becoming increasingly unreliable," Decker said. "And with the site, they can confirm what they've been experiencing in their daily lives and get the quantitative analysis that can be used to create a strong argument for the change that we need."

Upper West Side resident B. Rosano—she wouldn’t give her full first name—is one of the 2.5 million New Yorkers who ride the bus each day. "Sometimes you wait half an hour or 45 minutes for a bus, and then three or four of them arrive all together," Rosano, who rides the M116 and the M11, told Gothamist as she waited for the M116 this morning. "There's no use in complaining to the MTA. They don't do anything about it."

According to data from Bus Turnaround, the average speed of the M11 is a glacial 5.2 mph, compared to a citywide average of 7.4 mph. It would take a commuter 11 minutes and 30 seconds to travel 20 blocks on the M11, compared to 20 minutes walking at Google Maps speed/more like 16 at NY walking speed. And that’s not including wait time. The route also suffers from significant bunching—more than 16 percent of M11 buses arrive within two minutes of a previous bus's scheduled arrival time. 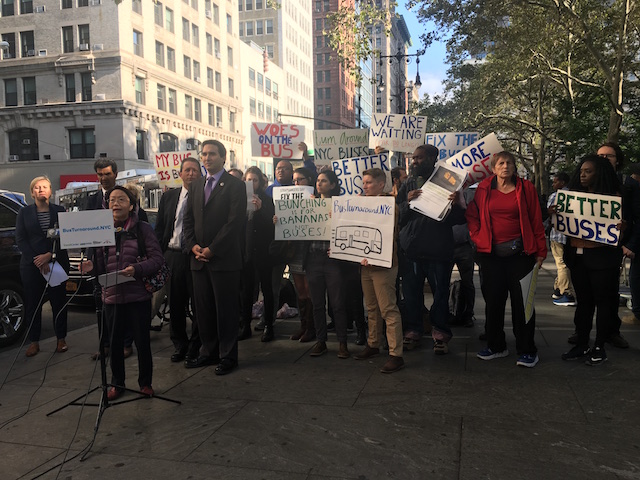 Due to the unreliability of the city's buses, New Yorkers who live in transit deserts are often forced to rely on private transport for their daily commute.

"Dollar vans and car services like Uber, Lyft, and Juno take advantage of the bad buses that are plaguing us," Saint Albans resident Natasha Saunders said Thursday morning at a Bus Turnaround press conference near City Hall. "If you ask anyone in Jamaica, they'll tell you dollar vans run better than the buses—and don't let the name fool you, they cost more than a dollar."

At the press conference and a subsequent City Council hearing, Council Member Ydanis Rodriguez, chair of the Council's Committee on Transportation, emphasized the disproportionate impact insufficient bus service has on the city's poorest residents, who are more likely to live far from a train line and more likely to make multiple transfers during their daily commutes.

According to a recent report by the Riders Alliance and the Community Service Society, low-income families rarely purchase unlimited MetroCards, meaning they end up paying more per ride than higher-income New Yorkers—especially when delayed buses force them to forgo free transfers.

Since only about 100 of the city's 422 subway stations meet ADA standards for accessibility, surface transit is often the only reliable transportation option for disabled and elderly commuters, many of whom find themselves squeezing onto crowded buses. With the L train shutdown looming, buses are likely to get even more crowded.

Bus Turnaround has put forth a multi-pronged proposal for revamping the city’s bus system. Recommendations include:

At both the press conference and hearing, Decker and Nick Sifuentes, deputy director of Riders Alliance, urged the MTA and DOT to develop a list of steps that can be taken to add dedicated bus lanes to at least 25 routes by the end of 2017 and to identify a list of "hotspots" throughout the city where service is most unreliable.

According to Decker, these changes are relatively easy to execute. "It's more of a political than a technical challenge," she said. "We can make changes to the bus system almost immediately, whereas the subway requires far more capital investment and time."

Representatives from the MTA and Department of Transportation expressed their support for Bus Turnaround's plan at the council hearing—but said they need to ensure that changes to the bus system don't adversely affect the city's motorists. Many of the council members who provided testimony did not agree.

"Sometimes we need to make tough decisions and work towards the greater good, even if that inconveniences concerns like parking," Council Member Antonio Reynoso said during the hearing. "Parking is not a right; it is a privilege. But for many, the only way to get around is public transportation."

By
James Ramsay
Extra Extra: Everyone's watching a webcam of a fat bear snackin' on salmon

By
James Ramsay
NY Republican, Conservative Parties sue to upend absentee ballot counting in general election
By
Brigid Bergin
and
Jon Campbell
Heavy rain and strong winds headed for the NYC area this weekend
By
Michelle Bocanegra
11 mostly free things to do in NYC this weekend, including festivals, art party
By
Kerry Shaw
and
Steve Smith
Get the news New Yorkers need in your inbox