Under fire from Comptroller Scott Stringer and Governor Cuomo for the persistently decrepit state of the city's homeless shelter system, Mayor de Blasio is pledging to fix up and maintain shelters. Stringer's office announced today that it analyzed each of the more than 500 family shelters and found that all but about 60 have at least one violation inspectors consider immediately hazardous, and that such hazards are present in more than two thirds of the shelters that house children. Violations cover such issues as severe mold, leaks, collapsed ceilings, rats, exposed wiring, and peeling lead paint.

Also today, De Blasio announced a redoubling of the efforts of his Shelter Repair Squad, which he assembled in May 2015 and said consists of "hundreds" of inspectors and repair workers. Since then, the Mayor's Office says the Department of Homeless Services and other agencies have worked together to address 12,000 violations. Still, during the two week period that Stringer's analysts reviewed building records, 18,704 violations remained or had appeared anew. Family shelters house about 50,000 of the city's 58,000 sheltered homeless.

"No New Yorker—homeless or not—should have to put their children to bed in a building crawling with vermin or covered in mold," Stringer wrote in a letter summarizing his team's findings to Deputy Mayor Anthony Shorris.

To address the continued problems, Stringer recommended that the city stop farming out shelter oversight to private landlords and not-for-profits and directly lease or own shelter buildings.

A previous Comptroller report found that DHS staffers responsible for inspecting shelters seldom do so and instead rely on shelter operators to self-report problems, and that mechanisms for tracking building problems and ensuring that repairs are made don't exist.

Another possible solution Stringer proposed in his latest salvo was to require inspections of shelter apartments that certify zero violations before the city moves families in, as is done with Section 8 apartments.

The mayor's announcement did not address these ideas, but did pledge Department of Housing Preservation and Development contractors to make the most critical repairs where operators can't or won't, as it does with private apartment buildings. The mayor also said he would bring in workers with the Coalition for the Homeless, a private advocacy group, to monitor shelter conditions.

Shelter inspectors previously told the Comptroller's Office that they were understaffed and overworked, and could not under the existing workload proactively inspect and follow building conditions. As part of the new system, de Blasio pledged to create a hotline for shelter families to call to report conditions. 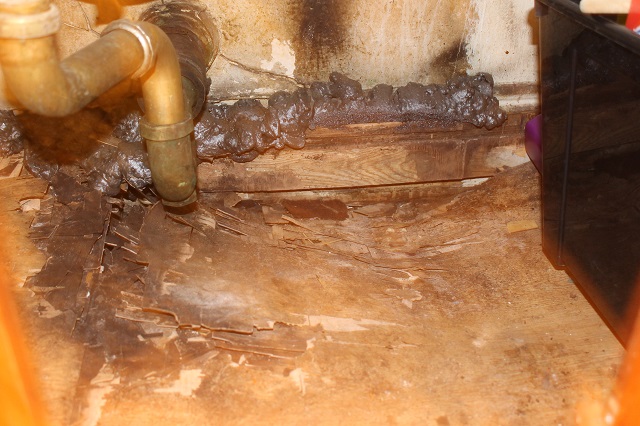 A rotting floor sprouting mold under a kitchen sink at a now-shuttered cluster site shelter in Brooklyn. (Nathan Tempey/Gothamist)

"We have already taken steps to improve conditions, but as a result we have learned that more is needed," de Blasio said in a statement. "So we have developed a systematic and thorough program to ensure that problems are promptly identified and fixed and that there is monitoring to make sure the repairs are done correctly and on time. I don’t want anyone refusing to come into a homeless shelter because of bad conditions."

The competing announcements come amid a shakeup at the Department of Homeless Services, where Commissioner Gilbert Taylor announced his departure last month. The agency has struggled with a ballooning shelter population and an increasingly sprawling, stressed network of shelters, hotels, and private apartment buildings. The burgeoning homelessness problem is in part a legacy of former mayor Bloomberg's three terms.

Under Bloomberg, housing costs skyrocketed, developers built big with city handouts, wealthy people prospered, and wages for middle and working-class people barely budged. On the shelter level, Bloomberg sought to restrict access to services through screening requirements, emphasized reliance on the cluster-site program, which farmed out shelter operation to landlords and nonprofits, often paying above-market rents at rent-regulated buildings, and along with Governor Cuomo, cut funding for the Advantage rent voucher program.

Shelters also became increasingly dangerous under Bloomberg—according to the Daily News, by de Blasio's first months in office, there were nearly three life-threatening attacks per day at city shelters.

When he took over, de Blasio signaled a new approach to housing policy by lifting shelter restrictions, announcing an ambitious, if contentious, affordable housing plan to build 80,000 below-market apartments and retain another 120,000 over the next decade, commissioning a study of the shelter system, appointing a prominent homeless advocate to run the city's welfare agency, and creating a new rent voucher program. The number of serious attacks in shelters was closer to 2 per day during the last fiscal year.

Still, the homeless population has surged on de Blasio's watch, and has become a target for political foes, most prominently the New York Post and Governor Cuomo. Early this week, Cuomo released, then rapidly backed away from an order that would have mandated police to forcibly remove homeless people from the street and place them in shelters in below-freezing weather.

The order was supposed to go into effect yesterday, but by that point Cuomo and his staff had conceded that the order had no teeth as de Blasio refused to do anything with it, civil rights attorney Norman Siegel vowed to fight it, and agencies statewide revealed that they had not been consulted.

Discussing the order on 1010 WINS on Sunday, Cuomo challenged de Blasio to fix up the shelter system, saying that common refrains from people leaving on the street should be invalidated: "On the concern of 'I don't want to go into the shelters because shelters are dangerous,' that's just unacceptable. We want people to be sheltered in safe, clean, decent, well-maintained places and they will be."

On the streets of the city during the first day of the order's implementation, though, outreach continued as usual during a cold spell, with social service providers, NYPD officers, and EMTs checking up on street-dwelling homeless people's every four hours and hospitalizing or moving them to shelter in some cases, almost always voluntarily, though people deemed to pose an imminent danger can be involuntarily hospitalized.

The New York Times reported that by this morning, "authorities had taken 97 people off the streets and put them into shelters or hospitals. An additional 101 people living on the streets sought care at emergency rooms."

Many homeless people queried by Times reporters said that either they weren't approached by cops or outreach workers overnight, that cops didn't mention shelters, or that they had declined rides to shelters.

"I’d rather sleep in a train than go to a shelter,” Ashton Griffith told the paper. “It’s nothing but fights with staff and people who live there. It’s animal mentality."