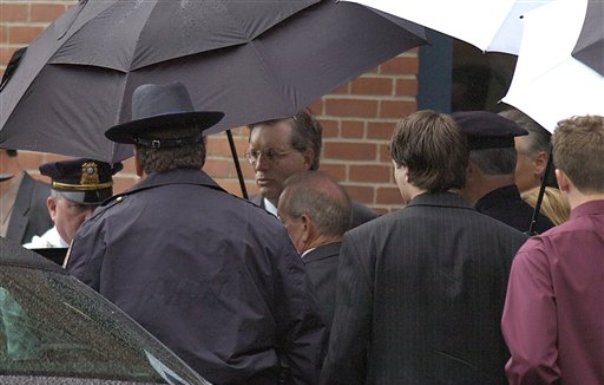 Dr. William Petit Jr. remembered his wife Jennifer and two daughters, Michaela and Hayley, Saturday, almost a week after they were killed in a gruesome home invasion robbery in Cheshire, CT, when two men broke into the Petit home at 3 a.m. last Monday. Dr. Petit was reportedly bludgeoned almost immediately and left for dead in the home's basement, while the attackers assaulted his wife and daughters, forced his wife to withdraw money from a bank, and later burned their house down.

Petit, a prominent endocrinologist, was the only family member to survive the encounter, emerging from the house several hours later as it burned. Speaking publicly for the first time, he told the thousands of mourners at a memorial service, "I guess if there's anything to be gained from the senseless deaths of my beautiful family, it's for us all to go forward with the inclination to live with a faith that embodies action. Help a neighbor, fight for a cause, love your family. I'm really expecting all of you to go out and do some of these things with your family, in your own little way, to spread the work of these three wonderful women. Thank you." The Daily News said that 1,800 mourners filled a hall at Central Connecticut State University Saturday, with many more occupying overflow seating, to eulogize and remember the mother and daughters. A private funeral and burial was held earlier. 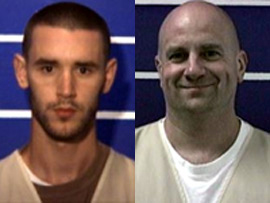 The events unfolded last week, when the police believe that Joshua Komisarjevsky and Steven Hayes, two parolees who met each other at a halfway house, staked out the Petit home. The New York Post reported yesterday that Jennifer Hawke-Petit and her 11-year-old daughter Michaela had been stalked at a grocery store parking lot near their home the day before by the suspected murderers. After the pair broke into the Petit home and put Petit in the basement, Hawke-Petit was forced to a bank at 9 a.m. Monday morning to withdraw $15,000. Somehow, she signaled to the teller that her family was in danger. The teller then called the police, but it was too late: The Petit house was already burning.

Police believe that Hawke-Petit was killed by Komisarjevsky or Hayes almost immediately upon return to her home. Seventeen-year-old Hayley Petit and her 11-year-old sister Michaela died from smoke inhalation after gas was splashed around their beds and set alight. It's believed that Hawke-Petit and Michaela were sexually assaulted. As police formed a barricade outside the Petit home to prevent Komisarjevsky and Hayes from fleeing, they witnessed the fire and could hear one of the two girls screaming for help.

Reports say that both men are attempting to pin the other as the primary culprit. Komisarjevsky and Hayes will be charged with murder, sexual assault, kidnapping and burglary. Connecticut prison officials defended their decision to parole Komisarjevsky and Hayes, saying that despite lengthy criminal histories, neither had a record of violent crimes, but Connecticut Governor Jodi Rell has asked for a review of parole and probation procedures. Twenty-three-year-old Komisarjevsky was a familiar face around Cheshire, having grown up in the Connecticut town north of New Haven.

Connecticut prosecutors have stated their intention of seeking the death penalty. In an interesting parallel to events in New York, the public defenders have a accused a Connecticut state attorney of potentially "polluting" the jury pool with statements. The NY Times reported that John A. Connelly had "described the case as the 'most horrendous murder in the state of Connecticut in the last 30 years,' adding, 'There are about five ways you could charge capital felony.'" Last week, the NY Sun noted that Brooklyn DA Charles Hynes' remarks about the suspected cop killers Dexter Bostick, Robert Ellis and Lee Woods, calling them "scum" and one a "mutt" and telling NY Post columnist Steve Dunleavy, "If these scum are convicted, I hope, I really hope, they rot, rot in jail," could be a violation.

Do you think Connecticut prosecutors should seek the death penalty? Do you think the suspects will plead guilty to avoid a trial and for life in prison?

Photograph of Dr. William Petit after the memorial service by Jessica Hill/AP