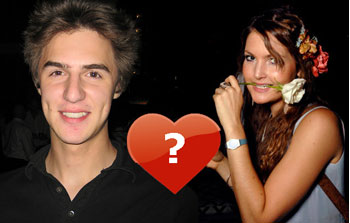 Well, that didn't take very long. Turns out New York's Subway Cyrano, Patrick Moberg, has found his lady love. Or rather, Blackbook outed her as one of their very own interns. Patrick apparently got a tip from a friend of hers prior to that, and updated his website with a big 'ol "FOUND HER!" illustration.

A little about the girl: she's an Aussie, her apartment burned down a few days ago, and she's currently on the Sex and the City movie set as an extra. Guess she can play herself when this hits the big screen. Her name hasn't been revealed, so for now we'll just call them Patraussie, because let's face it -- combined couple names were made for these two.

Patraussie are talking, but only to each other -- Moberg says that the rest of the world will have to come up with their own ending to this story while they figure out if it's love, or just well-positioned hair flowers that made him so attracted to her.