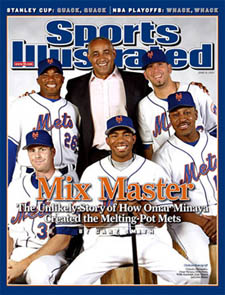 New York may be going through its first October without baseball since 1994, but that isn’t stopping the local teams from handing out deals to their GM’s. Yesterday, the Yankees brought back Brian Cashman. Today, the Mets announced that they have extended Omar Minaya’s deal for three years through 2012. Minaya, who was signed through 2009 already, could be with the club though 2014 if two club options are picked up.

It’s an odd move by the Mets when you consider how the season ended and the fact that they didn’t have to extend him at all. Those facts didn’t seem to concern Jeff Wilpon who declared today, “Omar is our guy. We believe he has a plan to take us forward to where we need to be.” Wilpon did promise to make changes to get the team back into the playoffs adding, “There might be some addition by subtraction.”

The Mets are still talking with Jerry Manuel about making him manager on a permanent basis with Minaya telling the press, “Right now we’re focusing on hopefully getting Jerry on board.” However, there are reports that negotiations between the Mets and Manuel are not going smoothly. Minaya also told the press that he had notified Carlos Delgado’s agent that the Mets plan to exercise their option on him for 2009.

The Mets also confirmed reports that Johan Santana pitched through a torn meniscus in his left knee for the final month of the season. Santana underwent surgery yesterday and is expected to make a full recovery before spring training. The news makes Santana’s efforts over the last few weeks even more impressive. Can we start calling his last start the “wounded knee game?”