Megabus Readies for the Road 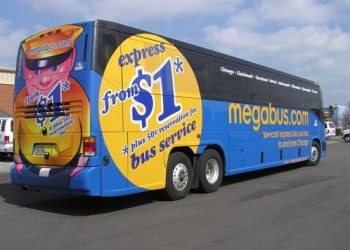 Back in 1933 Popular Science reported on New York engineer Walter H. Judson's new railway which would have trains running from San Francisco to New York in 18 hours, and Chicago to New York in 5.5 hours. Now it's the buses battling it out to have the quickest times and cheapest fares to and from New York.

Earlier this month BoltBus announced fares from NYC to DC and Boston starting at as low as $1. And now, just in time for Boltbus's launch on the 27th, Megabus is rolling in to steal its thunder.

The AP reports that "Megabus.com is based in Paramus, N.J. It already operates in several states and is a subsidiary of Coach USA. Tickets will start at $1 a fare. Prices rise as the departure date approaches. Its vehicles are equipped with movie screens and free wireless Internet connections." Their service will begin on May 30th, and they're expected to announce cheap fares to six other East Coast cities in the future.

BoltBus told The NY Times that they won't be outdone by their new competitor, saying they're “the best of all worlds in terms of extreme value and on-board service, with three inches of extra leg room and electrical outlets at every seat.” It's anyone's game, but the Chinatown Bus is looking more and more like a spectator.