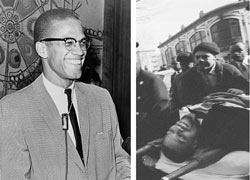 Thomas Hagan is appealing the most recent denial of his parole for the 1965 murder of Malcolm X, who was gunned down in front of his family at Washington Height's Audubon Ballroom. The September 2007 denial for parole means that Hagan's next opportunity nine months from now will be his 14th. Hagan has been imprisoned for 43 years since he pleaded guilty to killing the controversial community leader.

The extent of Hagan's imprisonment for the violent killing of Malcolm X may surprise some. The 66-year-old was sentenced to 20 years to life and has not been completely free for the last 43 years. For the past 19 years, however, Hagan has been a 5-and-2 prisoner at the Lincoln Correctional Facility, meaning that he lives with his wife in Harlem on a work-release program five days of the week, and spends two days a week (or approximately 12 hours) confined on the weekends. In contrast, James Earl Ray died in prison in 1998 for the assassination of Martin Luther King, Jr.

The other two men who were convicted of murdering Malcolm X were paroled 20 years ago and Hagan has consistently denied their involvement in the shooting. Hagan accepts responsibility for the assassination, but says that it was an impulsive act rooted in rage and allegiance to the Nation of Islam.