Life After Tuition: A Tale Of Two Cooper Unions

Decreased quality. Increased debt. An expanded campus. A hollowed community. Two classes of students. The end of meritocracy. Another school fallen prey to policies being adopted by universities around the country.

These were the fears held by many Cooper Union community members when the administration first announced in 2011 that it was considering charging tuition at the historically free school. Peter Cooper, a self-taught industrialist, inventor, and philanthropist who had never been afforded the opportunity of formal schooling, believed that education should be “as free as air and water” and wanted to create a place where classes would be open to all. Founded in 1859, Cooper Union originally charged for certain programs but became free to everyone in 1902, when Cooper’s heirs donated a property now located under the Chrysler Building, from which the school collects rent, and also matched a $600,000 donation from Andrew Carnegie.

But in the fall of 2011, thanks to ill-advised investments and new construction plans, the Board of Trustees and President Jamshed Bharucha believed that charging tuition was the school’s only hope for survival. Students disagreed, and many spent the following three years protesting, rallying, sitting-in, and occupying in attempts to stop the Board of Trustees from violating the school’s mission by voting in-favor of tuition.

Despite these efforts, the Board voted last January to pay only half of incoming students’ tuition with a scholarship of about $20,000 per year starting in fall 2014. In response, students, faculty, and alumni formed the Committee to Save Cooper Union, which is currently pursuing legal action against the Board, arguing that voting to impose tuition was a breach of its fiduciary duty. They are also seeking an injunction against charging tuition.

In the meantime, the school kept attracting new applicants—although about 20 percent less than the previous year—and admitted a new class. This September, those students would become its first paying freshman class, and those original fears held by many who had experienced a free Cooper Union were poised to become reality.

And yet, the splitting of Cooper Union—between paying freshmen and non-paying upperclassmen; between a community built on reciprocity and one where students were paying customers—has not occurred in the predicted fashion. Instead of tearing students apart from one another, the imposition of tuition has, in its first month, created a different division, one between students and faculty trying to preserve the founding mission and an administration and Board trying to erase it.

“I think there was a lot of fear that there would be this rift between students who are paying and students who are not, but what we realized is that the students who are here and are paying, they didn’t apply because they love paying,” says Casey Gollan, a 2013 alumnus who remains involved with Free Cooper Union, the group formed in 2011 to organize against tuition. “They actually have an axe to grind about the fact that they’re the first class for which the school has been ruined. They really want to fight back.” 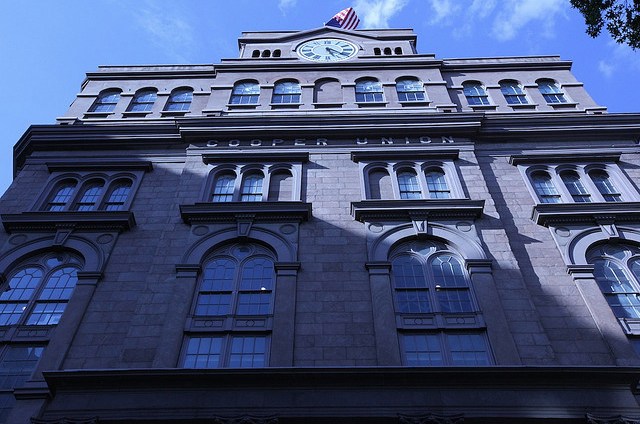 According to Gollan, Free Cooper Union’s very public fight against tuition actually served to attract more political applicants to the school, aiding in the continued cohesion of the student body: “In the past few years, there’s a culture that’s built up. The freshmen that came in this year, a lot of them came in knowing what Free Cooper was, knowing about actions, knowing about the administration, knowing about the lawsuit.”

One of those freshmen was Katherine Moger, who was involved with Free Cooper Union by her third week of classes. “We’re not complacent in it,” she explains of her year’s role in the changes that have come to the school this fall. “We’ve all paid at least the first semester’s tuition at this point and there’s this understanding that it’s not okay.”

When Moger and her classmates arrived for orientation this year, they were greeted with something new: an option to go on an out-of-state retreat instead of the usual on-campus orientation. “I felt like they were trying to divide us from the upperclassmen,” she says. She does not sense that her peers expect more than previous classes because they pay tuition or that they are resigned to attending a different Cooper Union than their predecessors. If anything, it’s the opposite: “Even if our class never is given free tuition, the point isn’t about our individual problems. It’s more about the larger story and preserving the legacy of the school.”

The off-campus orientation was once a tradition, but it had not been available for students in many years. “We revived the tradition this year,” explains Justin Harmon, the school’s VP for Communications. “To my knowledge, nothing has been done for these students that has not been done for earlier classes.”

That, however, may be part of the problem. “[The administration] is trying to act like nothing’s happened, but they’re also trying to erase what’s happened,” says Andy Overton, a third-year student. “Even if we haven’t fully become what all the other schools are, we’re well on our way.” 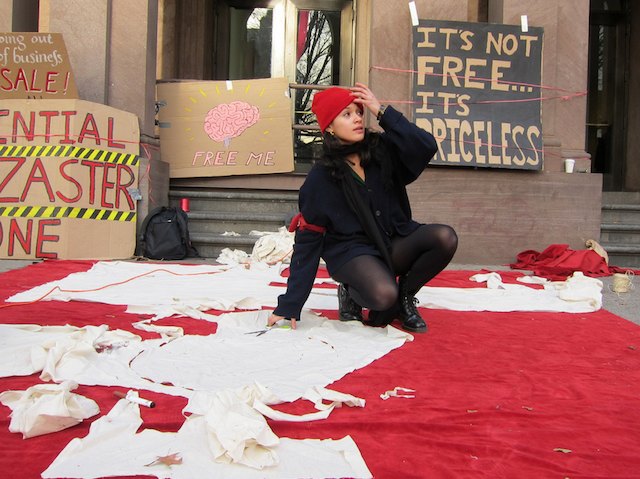 Student organizers are now awaiting the judge’s ruling on the lawsuit while continuing to brainstorm ways to prevent tuition from becoming a permanent fixture. Their organizing also includes a broader critique of the school’s governance structures and lack of transparency in decision-making.

To students, the administration and trustees seems to be on a mission to make Cooper Union more competitive with other colleges and more impressive in its resources and facilities. In the process, they are also making it incompatible with the school that students are hellbent on sustaining—and with an average national student debt load of $29,000, increasing costs, and decreasing public funding, it isn’t hard to see why they remain so dedicated.

Claire Kleinman, a freshman who is a petitioner in the lawsuit, describes the very choice to attend the school, even with tuition, as a means of fighting against the policies governing most colleges: “You had to make a decision whether to protest by not applying or to go here because we want to be here and make it something that we’re proud to show America—without all of the glitter or unnecessary things that colleges are doing to get students.”

Two summers ago, when Free Cooper Union occupied the president’s office for sixty-five days, red lights illuminated the office’s windows every night. On September 28, as the first month of classes came to a close, many of the windows in the freshman dorm turned from black to red. Cooper Union’s new paying customers had just engaged in their first act of resistance.

Rebecca Nathanson is a freelance writer in New York. Her writing has been published by In These Times, n+1, The Nation, RollingStone.com, and Waging Nonviolence.