Is the Montauk Monster All Washed Up? 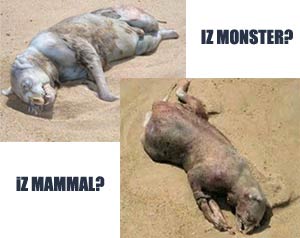 While you were sleeping, the Montauk Monster story kept spinning, this time landing on PlumTV, Newsday and...CNN. In an attempt to reassure a jittery public, the CNN quotes "experts" who say it's either a dog or raccoon; some think it may have washed up from the Plum Island Animal Disease Center.

Newsday got a hold of another photo, which some people think makes the "monster" look much more canine (maybe that Corwin guy does know what he's talking about). However, Christina Pampalone and Ryan O'Shea (takers of the latest image, thumbnail in left corner), aren't convinced, saying, "Everybody I showed pictures to said it looks like a dead dog. But looking at the claws, and at the teeth in the front, it looked like it could be something else, something vicious." Newsday also reports that this isn't the first monster the ocean has spit up; one was allegedly found last month at Jones Beach, and one witness claims to have see it alive in the Montauk dunes.

Meanwhile, over at PlumTV they talk to the photographer, Jenna Hewitt (and friends), who took the original photo everyone has been trying to decipher. A scientist told them it's definitely not a dog, because its feet and eye ridge don't match up -- until someone can help them identify the poor thing, however, they're keeping the remains in a box. See their clip after the jump.