"I don't think you're supposed to be here," a teenage boy in a yarmulke tells me, staring me down through a car window in disbelief. "It's not right."

I'm sitting in the passenger side of an RV on Eastern Parkway, about to take part in the biannual "Mitzvah Tank Parade," courtesy of Crown Heights's Chabad-Lubavitch community.

Twenty-eight RVs—all bedecked with pictures of the Lubavitcher Rebbe and heralding the imminent arrival of the Messiah—are set to parade through Brooklyn into Manhattan, blasting music and reminding Jews and gentiles alike that Passover is on its way.

I am going to ride with them, and it's clear I am an outsider. I am Jewish, but I am obviously not observant. I'm wearing jeans, for one thing, which is verboten for women in the ultra-Orthodox Jewish community. I'm also, in that vein, a woman, and all 28 RVs appear to be filled exclusively with boys and men. The gawking teen is not wrong—I am not supposed to be there, and I am a little uneasy.

"Chabad wants to spread the 'good word' about Judaism," my chaperone, Yossi Vorovitch, tells me. "The Rebbe says it's a mitzvah, a good deed, to spread the light of Judaism out to the whole world." Hence the mitzvah "tanks."

For some, the ultra-Orthodox community is startling and alien, but it's not the unfamiliarity that makes me uneasy. I went to a Jewish day school from nursery through eighth grade, and though my family wasn't religious—and the school welcoming of all denominations—as a kid I felt pressured to feign observance to fit in. I pretended to be kosher. I feared other children would spot me getting out of my parents' car on a Saturday. I hid the Halloween candy my mother would put in my lunchbox, since the other kids scoffed at that pagan holiday.

By middle school, things were worse. I joined my class's more religious prayer group because it seemed elite and exclusive, even if girls had to sit on a different side of the room from the boys. I worried about my friends showing up to my parents' hippie Reconstructionist synagogue on my bat mitzvah and judging it for not being modern Orthodox. When I visited a family friend my age in Borough Park, I wore a long skirt and followed her lead when it came to ritual hand-washing and praying after the meal. Not being an outsider was important, and the only way to do that was to follow the rules. 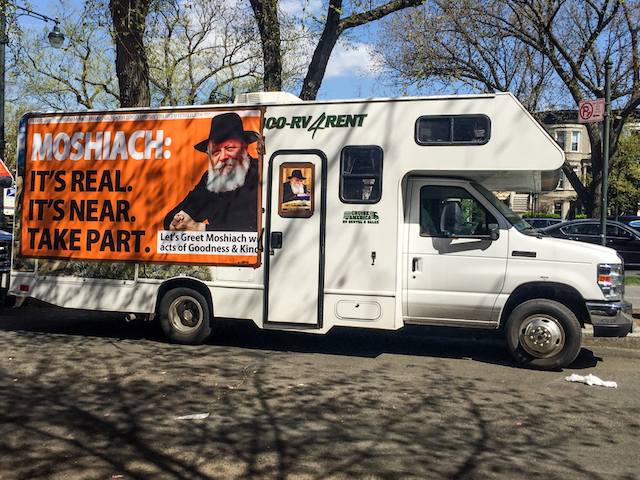 The Chabad-Lubavitch are much more welcoming of outsiders than the Satmar Hasidim in Williamsburg. They are disciples of Menachem Mendel Schneerson, a wildly influential Orthodox Jewish rabbi who moved to New York from Eastern Europe in 1941 and helped unify Jews who were displaced and suffering in the aftermath of the Holocaust. Schneerson preached outreach to Jews living in isolated communities, urging his followers to teach non-practicing members of the tribe about holidays, rituals, history, and customs.

Schneerson died in 1994 (though the devoted say that's up for debate), but his message resonated with the rest of the sect, which is why so many Chabad houses freely dispense alcohol on college campuses.

Vorovitch tells me that the Chabad community's been sending the so-called "tanks"—dubbed as such because they're combating an "army of evil"—out into secular communities twice a year since 1974, later setting up camp on street corners to offer unsuspecting laypeople candles and matzah for Passover.

Near holidays like Sukkot, Hanukkah, and Passover, it's a rite of passage for non-Orthodox New Yorkers to get approached by Chabad activists asking, "Are you Jewish?" before thrusting a pair of Shabbos candles on them.

Vorovitch, who grew up in Toronto but now lives in Crown Heights with his new wife, was born to two former secular Jews from the USSR who later became involved with the Chabad movement. They were once outsiders too, which is perhaps why Vorovitch is so kind to me, even though I am clearly a fallen angel.

He asks me if I'm Jewish (I am), if I've been to Israel (I have) and if I speak Hebrew (I do), and when the aforementioned teenager tries to eject me from the mitzvah tank, Vorovitch tells him he's being disrespectful and asks him to apologize. He does. It's nice.

And so, I'm good to go, with Vorovitch in the driver's seat and about a half-dozen boys ranging from age from roughly six to eighteen, in the back of the RV. The tanks are all blaring the same song—"Moshiach! Moshiach! Moshiach!"—but the synchronization is off, and the children are all yelling and fighting.

"It's a balagan," Vorovitch says apologetically, using the Hebrew word for "mess." The tanks begin to move, directed by police escorts, and we slowly turn up Kingston Avenue. "This is the main street in Crown Heights," Vorovitch tells me, and though the Crown Heights I know is dominated by Franklin and Nostrand Avenues, this is the main drag in this world. Much like Lee Avenue in South Williamsburg, there are clothing stores and grocery shops and delicatessens catering specifically to ultra-Orthodox Jews. A huge crowd of women and children cheer and wave as we pass by. Even though the Chabad-Lubavitchers aren't as resistant to the outside world as the Satmars, the community is still isolated. 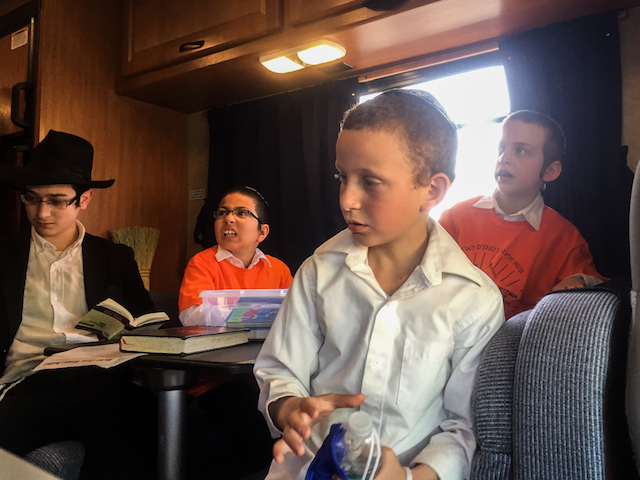 Vorovitch explains that the 28 mitzvah tanks make their rounds once around Hanukkah, and again on Rebbe Schneerson's birthday, which this year, according to the Jewish calendar, is April 19. School-aged children (male, of course) can sign up to ride in the tank, and the older teenagers serve as staff and counselors. The group will preach 10 mitzvot—Jewish education, purity of family, tefillin, having a mezuzah on your doorpost, having a home full of Jewish books, lighting Shabbos candles, loving a fellow Jew, tzedakah (charity), and keeping kosher.

The last mitzvah is that of the "moshiach campaign," which is what we're striving for today. (Mosiach means Messiah.) The Chabad-Lubavitch believe that we are very close to the coming of the Messiah, and we have to carry out these mitzvot for it to come.

The mitzvah tank uneasily careens down Eastern Parkway—Vorovitch has trouble driving the RV, which he complains is a "hunk of metal"—to little fanfare, and even when we head up Flatbush, few passersby even take notice, though one old man shakes two fists at the car. Vorovitch, who occasionally yells, "Happy Passover!" out the window, assures me the real action is in Manhattan. "There are a lot of personalities. Sometimes people smile and wave, sometimes they get mad," he tells me.

Inside the RV, the children chatter in a mixture of Hebrew and English. One child complains that his bike can move faster. When we pass by the Barclays Center, another child yells, "Hey look! The Islanders!" On the bridge, Vorovitch keeps hopping out to take photos of the parade for me. "The driver is crazy," one kid admonishes. I see a Victoria's Secret along the route and am tempted to point it out, but I refrain.

Vorovitch is right about Manhattan. We run red lights in Chinatown and come dangerously close to pedestrians, none of whom seem particularly pleased about the train of orange RVs blocking traffic and blasting music (it's still the "Moshiach! Moshiach! Moshiach! song, and by this point I am ready for Moshiach to come and end it). "Ach, Manhattan!" Vorovitch keeps saying, as taxi drivers try to cut him off. "Happy Passover!" he yells at them cheerfully, and the screaming children behind me follow suit.

This scene continues as we drive down Houston and head up 6th Avenue. We're solidly in the middle of the train now, and pedestrians are gathering at streetcorners to point at the trucks and snap photos. Vorovitch seems to think the spectators' laughter is a sign they're getting into the holiday spirit (maybe it is?) and he keeps shouting, "Happy Passover!" at them, punctuated with the occasional quip about how busy Manhattan is. Staffers in yamalkes, tallises and peyes run around in traffic, handing people boxes of round matzah and pamphlets urging them to "Vote for the Moshiach."

I ask Vorovich if anyone's ever shouted anything rude at the mitzvah tanks, or tried to attack any of them. "Of course. This is Manhattan!" he says. Right.

Inside the mitzvah tank, I am revisited by that old need to blend in. I showed up in Crown Heights in pants on purpose so I could distance myself from the clan, but inside the tank I'm starting to feel like I belong, and I wish I were dressed for the part. Vorovich and I swap stories about Israel and chat about the ritual cleaning of one's home for Passover, even though I do not intend to eschew bread products during the holiday. When a man crossing 23rd Street yells at our car, I feel indignant, as if I too am part of the cause.

I hop out of my mitzvah tank at Bryant Park, after nearly two hours inside of it. Vorovitch and the rest of the crew are headed elsewhere in Manhattan, where they'll post up on the sidewalk and hand out more Jewish goodies to passersby. Vorovitch asks if I want a box of round matzah and I decline, sprinting off to the F train as the tank drives away. It was nice of him to offer, but I have a lobster roll waiting for me in the office fridge.

By
Gwynne Hogan
Changing course, mayor relocates Bronx ‘tent city’ to Randall’s Island
By
Josefa Velásquez
In the Bronx, Republicans and Democrats alike took aim at relief center for migrants
By
Arun Venugopal
Cold, rainy weather will stick around in NYC, thanks to tropical moisture brought by Hurricane Ian
By
Catalina Gonella
Get the news New Yorkers need in your inbox