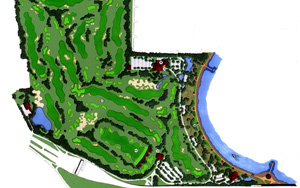 City Comptroller William Thompson Jr. stated in an audit released Thursday that the New York had wasted almost $6 million attempting to develop a Scottish links-style golf course in the Bronx. That's not how much the city spent; that's just how much Thompson thinks the city wasted. Developer Ferry Point Partners has been working on the project for the better part of the last decade (since 2000), and in 2002 requested additional funds for environmental remediation. Of the $7.2 million the Parks Dept. paid Ferry Point Partners since then, an audit released by Thompson's office determined that $5.8 million did not go towards environmental remediation.

A lot of the remediation work has to do with dumping dirt over the former landfill site. Back in 2005, Gothamist wrote about how this portion of the project was being handled by a company called New York Dirt that is allegedly quite a cash cow for the Gambino crime syndicate. Thompson's latest report on the project doesn't refer to the New York Dirt company, but does mention subcontractor Laws Construction, which was being paid for non-reimbursable items like fill.

From June 2002 to September 2006, Parks reimbursed Ferry Point Partners $7,242,754 for remediation work performed at the premises - an overpayment of $5,978,416. In an independent cost analysis, auditors estimated that the cost of the remediation, including landfill gas trench, installing monitoring wells, performing maintenance, engineering design and a required monitoring program, should have cost only $1,264,338. Moreover, auditors found that the improper reimbursements included work items associated with Ferry Point Partners’ obligation to carry out the required capital improvements, such as the costs of importing fill to construct the golf course, and other costs which were not eligible for reimbursement.

The audit also faulted the Parks Dept. for not reviewing billing invoices to see if they corresponded to any actual progress being made at the site and foregoing revenues that could have been assumed by the city and allowing them to be pocketed by Laws Construction.