On Friday, professional public relations person Justine Sacco, a NY-based PR chief at IAC, caused waves of outrage on social media after she made a tweet about AIDS and Africa (see below). Sacco was en route to Africa when her tweet blew up, sparking a hashtag #HasJustineLandedYet (even her father was reportedly "fucking" ashamed by the tweet). And by Saturday afternoon, she had officially parted ways with IAC. Sacco has now apologized for the insensitive tweet in a statement given to South African newspaper The Star. "Words cannot express how sorry I am, and how necessary it is for me to apologize to the people of South Africa, who I have offended due to a needless and careless tweet," she wrote. 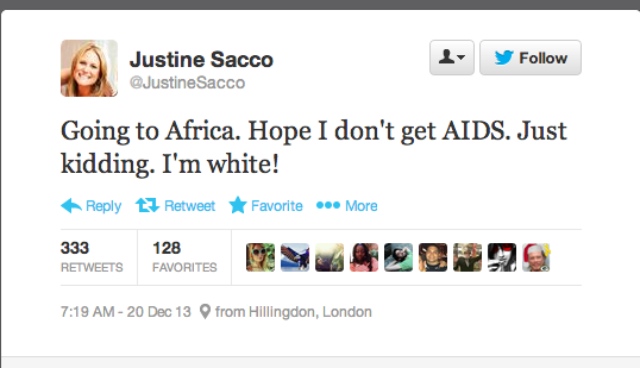 Here's the rest of her statement:

There is an AIDS crisis taking place in this country, that we read about in America, but do not live with or face on a continuous basis. Unfortunately, it is terribly easy to be cavalier about an epidemic that one has never witnessed firsthand.

For being insensitive to this crisis—which does not discriminate by race, gender or sexual orientation, but which terrifies us all uniformly—and to the millions of people living with the virus, I am ashamed.

This is my father's country, and I was born here. I cherish my ties to South Africa and my frequent visits, but I am in anguish knowing that my remarks have caused pain to so many people here; my family, friends and fellow South Africans. I am very sorry for the pain I caused.

Sacco described herself as "CorpComms at IAC. Troublemaker on the side. Also known for my loud laugh" on her now-deleted Twitter account (you can read some of her more peculiar tweets here). "It seems she has left a trail of casual racism across social media on her various travels," Mashable writer Chris Taylor said about the tweet. But "it was hard to ignore a disturbing feeling in the mob's response" to the Twitter messages "and something creepy in the trial by social media that was going on in her absence."

"We take this issue very seriously, and we have parted ways with the employee in question," IAC, the parent company of things like OKCupid, Vimeo, The Daily Beast, Match.com, and CollegeHumor, said in a statement. "There is no excuse for the hateful statements... We hope, however, that time and action, and the forgiving human spirit will not result in the wholesale condemnation of an individual who we have otherwise known to be a decent person at core."

On the plus side, the organization Aid for Africa bought justinesacco.com and set up a page for donations. "There's definitely an uptick of people giving to us since that happened," Barbara Alison Rose, the executive director of Aid for Africa, told the Daily News. "Certainly, a big increase over what we'd normally see."

"I would hope it provides the opportunity for people — especially Justine — to understand that this isn't funny," she said. "I'm so sorry for her, but she's in PR. She should know better."