In the wake of a spate of pedestrian and cyclist deaths during one terrible 30 minute period last week, the Department of Transportation today unleashed a 212-page study highlighting the many ways in which it has improved the roadways over the past several years. Among its many interesting charts and high-resolution photos, however, are a few pages dedicated to measuring the specifics of traffic fatalities—who is killed most often, contributing factors to crashes and what action is occurring at the time of the crash.

56 percent of traffic fatalities are pedestrians, and the most dangerous time of day for pedestrians, according to the study, is between 3 and 6 p.m., followed closely by 6 and 9 p.m. Men, regardless of age, are more likely to be hit than women, though the disparity is particularly stark between the ages of 5 and 17, when nearly twice as many boys are hit as girls, and between 30 and 39. 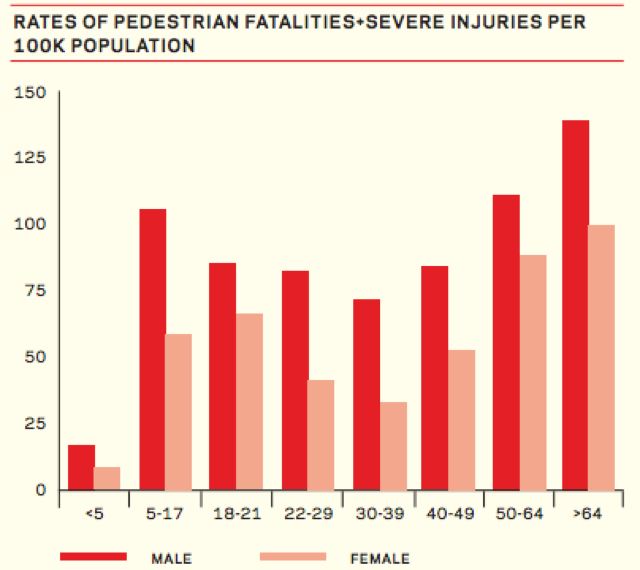 The DOT has taken steps to mitigate such crashes, such as installing Leading Pedestrian Intervals at 100 intersections since 2007, which display a "walk" sign for pedestrians before traffic lights turn green, and adding pedestrian countdown clocks, of which the agency plans to install a total of 8,000 by the end of 2015. The full report is available online here [pdf]. Streetsblog also has a great, in-depth look at the report, which we recommend.