The masterminds of the white flag attack on the Brooklyn Bridge probably figure they attended to every last detail and elegantly covered their tracks. "We pulled it off, comrade," they're saying as they clink champagne flutes on some Croatian island, counting all the money they made off the brazen heist. "Wait, where is all the money we made off this? There was... money, right?" But now it seems the NYPD has a break in the case, thanks to good old fashioned Deoxyribonucleic acid. 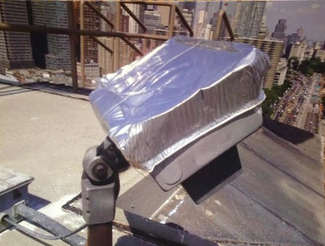 Sources tell the NY Post that the zip ties used to fasten the aluminum pans over the lights atop the towers have DNA evidence on them. Now investigators are running the DNA evidence through their vast database of DNA, and it's only a matter of time before a heavily-armed SWAT team crashes through your ceiling due to a data entry error. Look, there's a red laser beam on your forehead right now!

Also from the tabloid of record: "Investigators are also scouring social media, pulling phone logs and running hundreds of license plates, police sources said. They are tracking down all calls made from the bridge around the time the flags were replaced early Tuesday... Investigators were pulled from homicide, counterterrorism, intel and transit to hunt down the infiltrators..." Hey, whatever it takes to bring these skateboarding teenagers to justice.

In other white flag news, the city is beefing up security not only on the Brooklyn Bridge but on all other potential terrorist targets. "The NYPD has already implemented increased security measures on the Brooklyn Bridge, and multiple agencies are collaborating with the police on further measures that will increase the safety of this and other key facilities," First Deputy Mayor Anthony Shorris said in a statement. The NYPD doesn't think the white flags were related to terrorism, but the incident did expose glaring flaws in the city's security theater apparatus. The solution, obviously, is more security theater.