When 36-year-old Dan Hanegby was run over and killed by the driver of a charter bus Monday morning, he was pedaling a Citi Bike along a popular route from the West Side Greenway. The one-way street has parking lanes on both sides, but no bike lane. Safe streets advocates said this week that while conflicting details about the crash continue to appear in the press from various NYPD sources, one thing is clear—the tragic death reinforces the need for a robust network of crosstown protected bike lanes in Manhattan.

"Cyclists aren't killed when they have infrastructure that meets their needs," Transportation Alternatives Executive Director Paul Steely White said in a statement Tuesday. He cited Vision Zero data indicating that no cyclists have been killed while traveling in a protected bike lane in NYC since 2013. (When cyclist Kelly Hurley was fatally struck while cycling on First Avenue in April, she was at an intersection where the protected bike lane becomes a "mixing zone," open to cars and cyclists.)

There are currently several crosstown bike lanes in Manhattan, though none separate cyclists from traffic with a parking lane or raised pedestrian island. For example, one-way unprotected bike lanes span much of 15th and 16th Streets; 20th and 21st Streets; 29th and 30th Streets; and 54th and 55th Streets. There are also lanes on East 70th and 71st, and on both sides of Central Park at 77th and 78th, 90th and 91st, and 106th.

"We've started to acknowledge that there need to be clear crosstown bike routes, but we haven't made them physically protected," said Caroline Samponaro, an organizer with Transportation Alternatives. "Planning decisions have been made to prioritize the parked cars, but as cycling continues to grow it's time to really rethink that."

Samponaro added that her group would like to see protected lanes on side streets, as well as major crosstown routes like 14th and 23rd Streets. "I don't think it should be an either-or," she said. "Especially since we now have a major transportation option with Citi Bike."

Manhattan Councilman Ydanis Rodriguez, who heads up the City Council Transportation Committee, agreed in a tweet Tuesday. "Protected lanes save lives and when they aren't in place, we lose lives," he said. "Tragic death shows crosstown lanes are needed."

Hanegby was the first person to die while riding a Citi Bike since the program launched in 2013. Eighteen cyclists were killed in NYC traffic in 2016, up from 14 in 2015. Hanegby is the fifth cyclist killed this year, according to city data.

Cyclists have been calling for protected east-west connections to the Greenway since 2011, when the driver of a USPS truck fatally struck cyclist Marilyn Dershowitz on West 29th Street, according to Streetsblog. The outlet refers to a 2015 Manhattan Community Board 4 meeting, where then-Manhattan borough commissioner Margaret Forgione cited "large vehicle volumes" as a barrier to DOT's efforts to install protected crosstown lanes.

North-south protected bike lanes have proliferated in recent years, despite some community concern about the loss of parking space.

The DOT did not immediately respond to a request for comment. 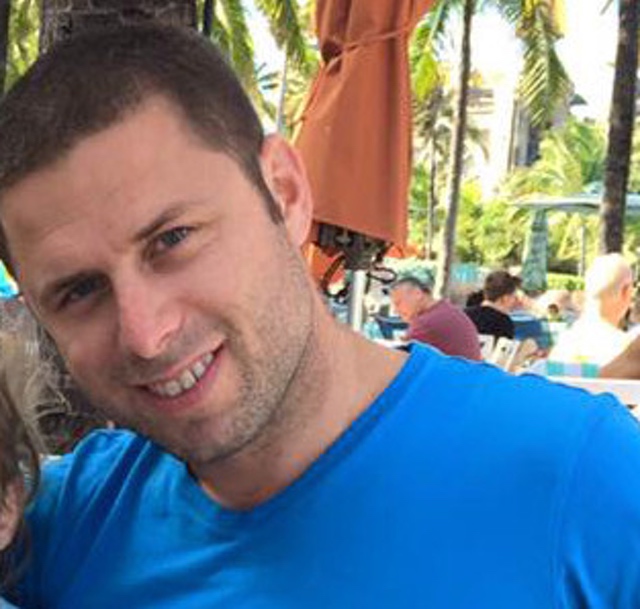 Hanegby, a father of two, lived in Brooklyn Heights and worked as director of investment banking at Credit Suisse. The NY Times reports that he moved to the U.S. from Israel in 2003 to study at Binghamton University and later Brown University. He was once the #1 ranked tennis player in Israel.

An NYPD spokesman detailed an initial CIS report on Hanegby's death on Wednesday. He said that some details were garnered from a review of security camera footage, which has not been publicized because the driver did not flee the scene.

According to the report, Hanegby and the charter bus driver were both traveling east on West 26th Street between 7th and 8th Avenues shortly after 8:00 a.m. on Monday. There was an unoccupied van parked along the south curb. As the cyclist and driver approached, Hanegby "swerved" left to go around the van. "Surveillance footage shows the cyclist looking right as he is swerving left," the spokesman said. "He is struck by the passenger side of the bus, loses control, falls to the pavement, and is then rolled over by the rear passenger side of the vehicle."

The driver remained on the scene, and was not charged, according to the NYPD.

Media reports have varied in the days since Hanegby's death. The New York Times and Daily News published the parked van report, while AM New York reported that Hanegby "lost control" before he was struck.

"There continues to be these early anonymous leaks of information which, by and large, blame the victim who is no longer there to speak for his or herself," Samponaro charged.