Cyclist Evan Neumann was biking up Allen Street on the Lower East Side last February when he was pulled over by an NYPD officer and issued a ticket for something that isn't against the law in NYC. As Neumann was approaching Stanton Street, he checked behind him to make sure there was no oncoming traffic, and left the bike lane to switch to the right side of Allen, in order to make the right turn on Stanton. He was then issued a ticket for failing to use the bike lane. Thing is, cyclists are not legally required to stay in the bike lane in NYC in every situation. 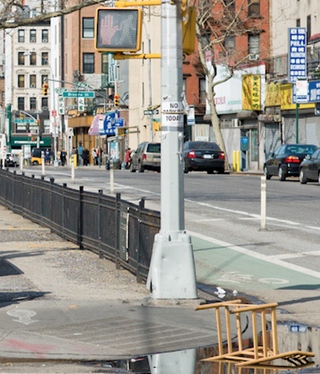 prohibits cyclists from riding on the left-hand side of the road or more than two abreast, and requires cyclists to proceed in a bicycle lane—but it does not apply in NYC. Neumann fought the ticket—which could have cost him between $50 and $100—and lost in traffic court, and the DMV appeals board also rejected his appeal. So now he's filed a motion in State Supreme Court to have the ticket dismissed. His attorney, Steven Vaccaro at Rankin & Taylor, is convinced his client will prevail.

"The NYPD has been enforcing VTL 1234 against cyclists since the Republican National Convention in 2004," Vaccaro tells us. "The NYPD has been confronted with their mistaken enforcement of this law in a variety of contexts, in two major federal litigations, and in each case members of the NYPD have given sworn testimony that they know VTL 1234 does not apply in NYC and should not apply. And yet it keeps happening!

"We knew the NYPD always had a problem in implementing their understanding of this, but in the case of my client, the traffic court judge didn't get it and the DMV appeals board didn't get it either. With more and more people bicycling, the NYPD needs to know what the law is." Good luck with that, counselor!

Here's what the rule is in NYC when it comes to cyclists and bike lanes: "Whenever a usable path or lane for bicycles has been provided, bicycle riders shall use such path or lane only except under any of the following situations: (i) When preparing for a turn at an intersection or into a private road or driveway. (ii) When reasonably necessary to avoid conditions (including but not limited to, fixed or moving objects, motor vehicles, bicycles, pedestrians, pushcarts, animals, surface hazards) that make it unsafe to continue within such bicycle path or lane." Neumann's lawsuit that he was legally permitted to leave the bike lane because he was preparing to make the turn.

Caroline Samponaro at Transportation Alternatives declined to comment on this particular lawsuit, but regarding this sort of ticketing behavior, she told us, "Bike lanes are designed to make bicycling safe. The law regarding bike lane use is advisory and is meant to encourage safety, stating that cyclists should (not that they must) ride in usable bike lanes unless they are blocked or unsafe for any reason.

"When cyclists are ticketed for not riding in a bike lane, particularly when they are not using the bike lane because they are making a turn across the street, clearly there is a breakdown in enforcement. A cyclist has no choice but to leave the bike lane in this instance. Our limited enforcement resources should be reserved to target the most dangerous behaviors and certainly shouldn't be deployed to write a ticket that is not valid, will likely be thrown out and does nothing other than consume valuable city resources to no safety end."